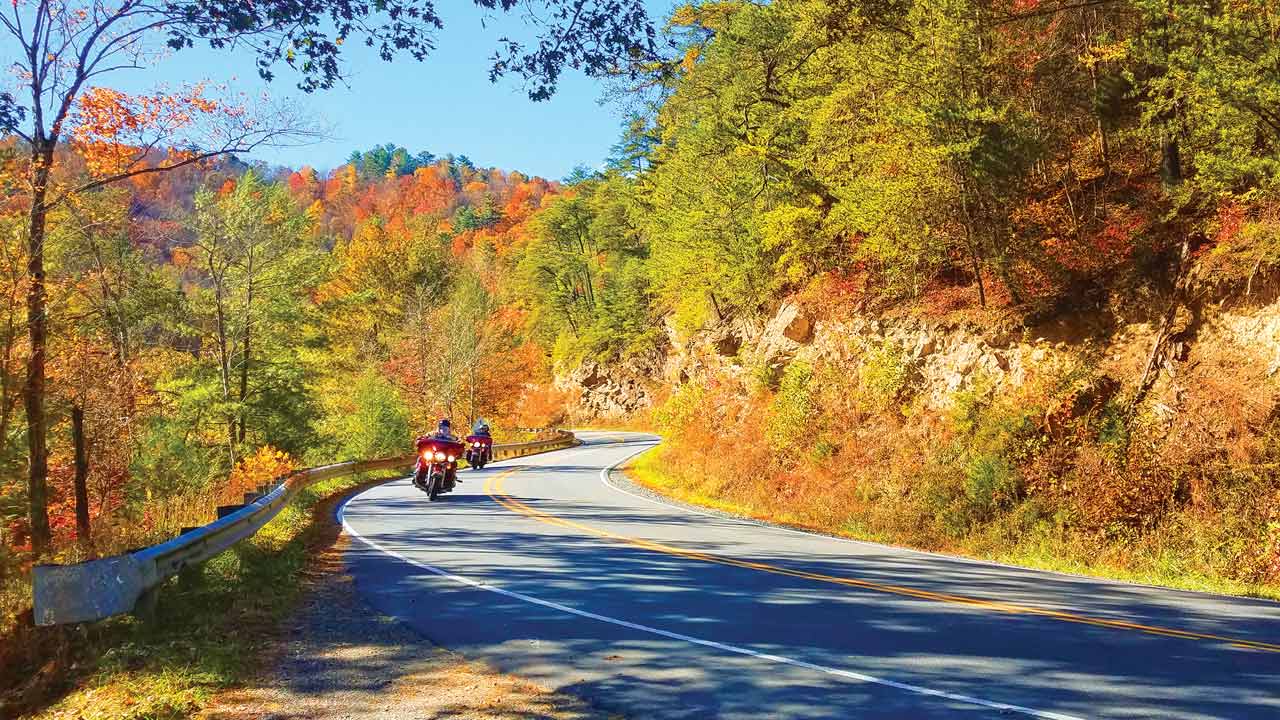 Something about the secluded valley draws them here, as it has for millennia, to the confluence of Spring Creek and the French Broad River, to where a rare hot spring emerges from the earth and ancient man painted symbols on rocky cliffs, to where paws, hoofs and feet formed the great Appalachian Trail. Some locals half-jokingly refer to it as “the vortex,” and today’s motorcyclists certainly are not immune to the lure of Hot Springs, North Carolina.

“The road up to Hot Springs, the Rattler, is a wonderful road,” said Charles Rempel, a sales and marketing manager from Hendersonville, N.C., as he stood near his 2015 Yamaha FJ-09. “Just about any road you turn down is fantastic.” N.C. 209, also known as “The Rattler,” twists its way north from Lake Junaluska and Interstate 40 to Hot Springs and features everything from sharp, cliff-hugging curves to gentle sweepers and even a long, relaxing pasture-lined straight across a wide valley.

The natural beauty surrounding Hot Springs attracts every sort of outdoor enthusiast. The town, with its bohemian vibe, sits surrounded by mountains as two waterways exit a gorge in the national forest into a peaceful meadow. The ancient ancestors of the Cherokee Indians gathered here, drawing animal figures and geometric designs on Paint Rock, a cliff along the French Broad River at the state line with Tennessee. A short section of gravel road on the edge of town takes adventurous motorcyclists to this enigmatic spot, faded by time and difficult to see, but still possessing a special attraction. Venture deeper into the forest and you’ll discover the Cherokee National Forest and Paint Creek Campground.

To the south of town, N.C. 209 tightens as you cling to the mountainside and pass low stone walls. A few pull-offs provide a wonderful vista to enjoy the fall colors of the Pisgah National Forest before you reach Hot Springs. Entering the town from the mountains to the east is U.S. 25, once part of the famed Buncombe Turnpike, an early route across the Blue Ridge Mountains from South Carolina. The Appalachian Trail joins the two highways along the town’s main thoroughfare, so the sight of some tenacious thru-hikers pausing on their several-month-long journey to Maine shouldn’t surprise you if you stop at one of the town’s watering holes.

“We call the tavern the core of town, right in the heart of it,” said Amanda Arnett, owner of Spring Creek Tavern, which occupies a 100-year-old building in the center of town. The tavern fills with travelers and sightseers each weekend. The covered porch overlooking Spring Creek proves popular during the height of tourist season, but the tavern remains open year-round. Their hand-rolled cheese sticks and brick-oven pizza are some of the most popular menu items, as well as the burgers, salads and wings, Arnett said. The bar features a wide selection of beer on draft and in bottles, with many varieties of craft beer from most of the region’s top breweries.

“We love our bikers. It’s really interesting to see the diversity among them,” Arnett said looking around the tavern at the mix of Cordura-clad motorcyclists in Hi-Viz gathered alongside bikers in sleeveless Harley T-shirts. “This area gets such diverse groups of people: the bikers, the hikers, the leaf-lookers, the river rafters, so it’s really cool how they can all sit out on that deck and coexist. In a lot of places, you might see a separation, but Hot Springs brings people to together.”

The Hot Springs Resort and Spa down the street attracts visitors for its mineral springs and hot tubs. The resort occupies the site of the former Mountain Park Hotel, a grand Victorian-era, four-story hotel that attracted the rich and famous as well as being was home to one of North Carolina’s first golf courses, historians say. When the tourism industry declined, the hotel owners leased the property to the U.S. government, which turned the resort into an internment camp during World War I for German sailors and immigrants. Fires and floods over the last century have erased the hotel and internment camp from the landscape, leaving only a vast lawn along the gravel driveway. Each summer, the resort’s campground just across U.S. 25 serves as the location of the Hot Springs Motorcycle Weekend, a three-day event featuring live music, vendors and bike games sponsored by the Concerned Bikers Association/ ABATE of North Carolina.

This region of Madison County also holds a dark past. Nine miles east of town near a quiet mountain creek is where the infamous Shelton Laurel Massacre occurred in 1863. Thirteen accused Union sympathizers were executed under the orders of Lt. Col. James Keith in retaliation for the theft of salt from a stockpile in Marshall. A state historic marker on the roadside near where N.C. 212 turns off to head for Flag Pond, Tennessee, is all that tips travelers to the wartime atrocity committed along this peaceful mountain road.

In Hot Springs, waves of motorcycles roll through town. Many bank left to follow N.C. 209 down The Rattler, which passes the Trust General Store 15 miles south of town. Riders often pull into the restaurant and store since its one of the few fuel stops along the route. The rocking chairs on the front porch make a great place to grab a snack and watch bikes and sports cars passing on their way up and down the mountain.

Next to the general store, N.C. 63 begins its climb toward Doggett Mountain and eventually into Asheville. It’s a popular short cut to the Rattler that avoids the heavy traffic out of Asheville on U.S. 25 or Interstate 40. After winding down several hairpin switchbacks on the descent from Doggett Gap, a sharp left on Sandy Mush Road takes motorcyclists along a wooded country road before becoming Bailey’s Branch Road and dropping into the town of Marshall along the French Broad River.

“We ride all over these mountains,” Rempel said as he joined his riding group back at the Trust General Store. “You can hardly find a bad road in this part of the country. Most Sundays, we try to take different routes to find something interesting.”