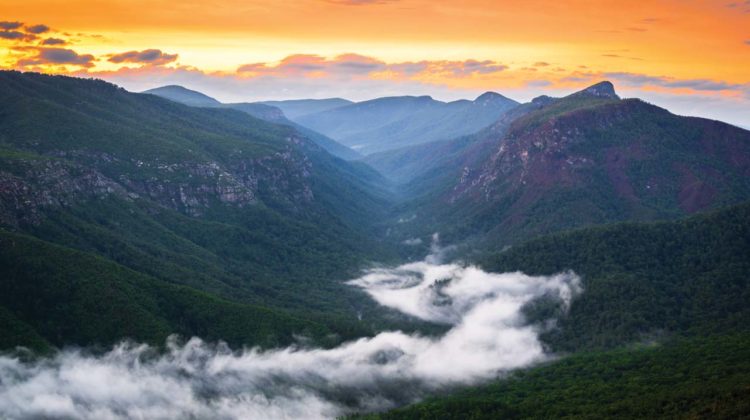 Ripples of water shimmer through the pines along the north shore of Lake James. I find a suitable pull-off and ease the bike off the road to take a break and enjoy this peaceful light show. This part of McDowell County, North Carolina, sits on the eastern edge of the Blue Ridge Mountains, and I’ve come here for a bit of adventure bike exploring along the rim of Linville Gorge.

I lounge by the shore enjoying the warming rays of the sun, the silence broken only by the howl of pick-up truck tires as a few passing anglers transport their fishing boats from the lake. I saw a news story last fall about a Bigfoot sighting along Lake James. It was accompanied by a blurry video taking from a boat of a shadow behind that tree that witnesses say is the elusive cryptid. Reputed sightings of the creature in recent years also prompted the nearby town of Marion to hold a Bigfoot Festival each September. I lift my eyes to the hills where I intend to ride and wonder if indeed he’s out there.

With a final check of my map, I mount up and head for Old N.C. 105, a gravel road running up the mountain and along the western rim of Linville Gorge in Burke County. Spring has yet to arrive in these climes, so the bare trees allow peeks back at the lake when the winding road twists to the left. Soon I reach the summit and a long plateau along the ridge top. I haven’t seen another vehicle since I left the lakeshore, so I stop to take in the view. With most of my days filled with motorcycle commuting through a traffic-clogged city, being able to just stop in the middle of an empty dirt road and connect with the environment seems to renew my spirit and remind me of the magic that adventure motorcycles unlock.

A rustling noise in the trees snaps me out of my reverie. Bigfoot? No, just a Cooper’s hawk alighting on a limb, probably returning from a patrol over the deep gorge just to the east.

Farther along the mountaintop road, I arrive at the turnoff to Wiseman’s View. A paved, quarter mile trail takes you to the scenic overlook revealing the majesty of this natural wonder. The vista across Linville Gorge includes Table Rock jutting out from the eastern ridgeline and the ancient river far below.

Returning to pavement a few miles north, I stop at the Linville Falls Visitor center near the Blue Ridge Parkway. Here visitors can descend into the gorge along trails of varying difficulty to see Linville Falls far below.

Not far away, Cross Creek Log Cabins offers group riders an ideal place to set up a base camp for exploring the area. They offer private cabins in a tranquil setting available for a minimum two-night rental. The property features a pond and trails that lead to the waterfall.

“We’re right along the Blue Ridge Parkway, which motorcyclists like to ride. We’ve got a couple of restaurants here in Linville Falls, so it’s convenient for a stopping place,” said owner Carolyn Gross. “We’ve got five cabins from three bedrooms to five bedrooms. They’re private from one another, but very conducive to being near each other enough that they can get together and cook together. We also have a covered pavilion area and fire pit where people like to gather.”

Ready to get going again, I decide to detour east to take a glance at Brown Mountain from the overlook on N.C. 181 nearby. This is a popular motorcycling road for residents of the Piedmont, and the Brown Mountain overlook on 181 serves as gathering spot. It’s from here that some folks have observed the famous Brown Mountain lights, a mysterious night-time display of flashing orbs science has yet to fully explain. Too bad I can’t stay until dark hoping to glimpse them. Legend says they are the ghosts of early settlers searching for a lost loved one with lanterns. Some scientists conjecture they may be ionized gas or possibly “earthquake lights” caused by seismic activity exciting the quartz in the tectonic plates beneath the mountain.

Whatever they are, they won’t be visible in the midday sun — and still no sign of bigfoot. I’m tempted to run N.C. 181 down the mountain toward Morganton after hearing the pipes of a group of cruisers rumble past, but there are other destinations I wish to see and they’re all in the opposite direction. I take the parkway back to Linville Falls and down U.S. 221 to the area’s famous caverns.

Lanie Gross, general manager of Linville Caverns, sees lots of Blue Ridge Parkway travelers stopping in to visit the limestone cave system that was first discovered in 1822 by outdoorsmen fishing in the north fork of the Catawba River.

“We offer a guided tour of the inside of Linville Caverns, which is a series of passageways inside the mountain,” Gross said. “It takes about 35 minutes on average to do the tour. The tour guide takes you in and tells you how the caverns were formed, how they were discovered and give you as much history on it as they can and answer any questions they may have on it.”

The caverns are open daily from March to November and only on weekends the rest of the year, she said. The temperature in the caverns stays 52 degrees, but visitors should bring a jacket since dripping water, which formed the cave, can increase due to the spring rains.

“We recommend bring a hooded jacket or poncho,” she said.

South of caverns down U.S. 221, I can’t resist taking N.C. 226A, known as the Diamondback, up to Little Switzerland. Here, I find other motorcyclists enjoying this twisty bit of fun. At the top, it’s become a habit to stop into the Switzerland Inn and relax on their back patio. The inn isn’t open for the season yet, so I won’t get to sit outside and gaze at the sweeping view of the ridge I just conquered.

The last time I passed through this area, Eddie Plam of Plam Werks, a BMW service, restoration and customization shop in Hendersonville, followed me on his BMW R Nine T up the Diamondback and along the ridgeline.

“I thought the ride was beautiful, and my favorite part was the road we took when we left Little Switzerland. I believe the awesome roads that surround us are the best motorcycling paths in the entire country,” Plam said.

We stopped at the Museum of North Carolina Minerals at the intersection of 226 and the parkway near Little Switzerland. Out back, I showed him the monument to the Overmountain Men, the group of Tennessee volunteers who marched across the Blue Ridge Mountains through this pass to win victory for the colonies in the Battle of Kings Mountain during the Revolutionary War.

“This is so amazing. We don’t have this kind of history in California,” he said of his native state.

Indeed. History — whether natural, military or even paranormal — abounds in this region. Each trip on my motorcycle offers the opportunity to discover a little more of it.