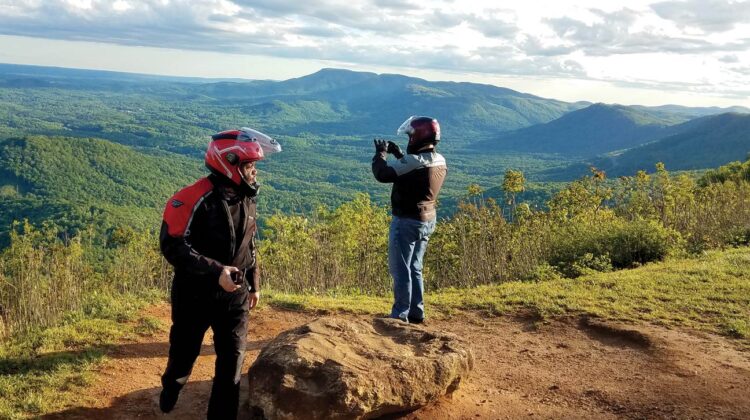 Springtime arrives early in the borderlands between the Carolinas near the base of the Blue Ridge Mountains. When the high country of the towering peaks remains brown and cold, the foothills surrounding Columbus, Tryon and Landrum offer interesting sights and a wealth of interconnected roads to explore.

Columbus, North Carolina, sits at the base of the Blue Ridge Escarpment. From Main Street, White Oak Mountain towers above. A winding road makes it way past Shunkawauken Falls, a narrow waterfall tumbling from the top of the mountain. The road passes over the middle of the waterfall, allowing riders to gaze upward and downward and see the cascade.

Keep riding higher and the view from the summit proves stunning. Here, Interstate 26 climbs up from Spartanburg, S.C., to pass through the historic Howard Gap, named for the Revolutionary War hero who fought the Tories by sneaking up on their position from the aforementioned gap in the mountains.

Roland Linder, a retired sports car and motorcycle racer from Belgium, lives in the Columbus-Tryon area, where he keeps a workshop full of motorcycles. His basement workshop is packed with everything from his Harley bagger to Yamaha flat track racer to a set of 500cc Honda Ascots.

“I had a racing buddy in the ’80s who grew up here. He said go see Tryon in the foot of the Appalachians,” Linder said. “We flew here, found a beautiful property with a nice home. It’s gorgeous here — beautiful roads, scenery, lakes everywhere.”

Linder also appreciates the microclimate near the base of the Blue Ridge Escarpment, where it can be five to 10 degrees warmer or cooler on either side of the sheltered region. The area avoids the snowfall just to the north and the scorching summer heat to the south.

“It doesn’t get too cold, too wet, or too humid here. It’s horse country, a town of retirement, but it’s a quiet place,” he said. “For a guy who loves motorcycling, I get out of my house, and it’s like a hill climb or race track right at my doorstep. You have windy roads that put a smile on your face. No highway, no freeway, just twisty roads with no traffic and they’re in super-shape, smooth, well maintained. For a motorcycle rider, it is a dream.”

A short ride down N.C. 108 brings you to Tryon. This region hosts several equestrian events each year. The back roads branching off 108 take riders through rolling pastures and past elaborate horse farms. Downtown offers an eclectic mix of shops and dining options. Be sure turn up U.S. 176 to check out the mural of famed singer Nina Simone, a native of Tryon.

Sitting on the state line between Tryon and Landrum is the hidden community of Lake Lanier. This small, private lake was built in the 1920s. Small cottages and lake houses line the scenic shore. A narrow, paved road lets you circumnavigate the mountain lake.

Heading south on U.S. 176 takes you to Landrum, where the Hare & Hound pub sits on the intersection with S.C. 14. The equestrian-themed eatery makes a great spot for lunch where you can map plans to explore some of the interconnected roads around the town. A favorite destination is Campbell’s Covered Bridge, less than 10 miles from downtown. The red bridge sits in a nice city park with plenty of room to walk and relax next to the gentle stream flowing beneath the 112-year-old bridge.

From here, riders can head north into the Blue Ridge or any other direction to enjoy empty roads crisscrossing the foothills. Time it right, and the peach blossoms along Hogback Mountain Road may be in bloom.

Les Stork from nearby Saluda, knows the Landrum area well. He’s explored much of it, often on his 2019 Honda CB500X, and is in the process of building a house here.

“The thing about Landrum is, you are in the mountains and the foothills. Deeper in the mountains, the roads are very tight, but you end up in a dead end. Down in the foothills, you’ve got a lot more roads that connect and go through,” Stork said. “There are so many loops you can go. I put loops together all the time to go up into the mountains, particularly in the summertime to go up where it’s cooler and work your way back down again. In the wintertime, you stay down low where it’s a little bit warmer.”

Being an adventure rider, Stork likes being able to explore the area’s interconnected gravel and paved roads, giving him a more enjoyable riding experience not far from home.

“The fantastic thing about living here, you pull out of your driveway and you’re instantly on good roads. I don’t spend 30 to 40 minutes getting to good roads and 30-40 minutes riding back. I go out and ride two hours, and I’m riding two hours of heaven. It’s the best riding I’ve found. I’ve ridden in Europe; I’ve ridden the West Coast; I’ve ridden up into Canada, but from Virginia on down to upper South Carolina is the best riding on earth.”