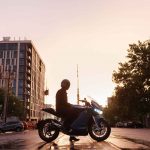 I love my bike. I mean I really, really love my bike, but I also love to try different bikes. Recently, I’ve ridden four different bikes, a 1971 Norton Commando, a 1975 Norton Commando, a 2021 Zero SR/S, and a 2022 Zero SR. Well, it was the Zeros that got me in trouble. If you’re a huge fan of Harleys with the loudest Screaming Eagle pipes you can get, a Zero may not be the … END_OF_DOCUMENT_TOKEN_TO_BE_REPLACED 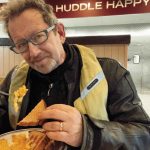 As riders, we’e always aware of road surfaces: Dry? Oily? Cracked?  Tar-snaked? Pot-holed?  We make these determinations in milliseconds. We don’t ponder the nature of pavement, but I do — or, at least that’s what I’m doing as I stand on the southbound lane of Interstate 81. In the rain. Surrounded by massive 18-wheelers. For four hours. Most of my mototravels seek out … END_OF_DOCUMENT_TOKEN_TO_BE_REPLACED 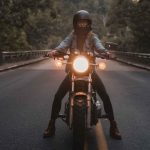 Embellished in silver-tinted leather gloves, Hayley Nelson wraps her fingers in a twisting arch over the throttle of her 1980 Honda CM 400T. She sits poised, adorned in all black garb with secrets of brown and red whispered from top to bottom. A veined lineage of motorcycle travelers fills Nelson’s blood with familial ties to motorcycling.  Originally from Hendersonville, … END_OF_DOCUMENT_TOKEN_TO_BE_REPLACED 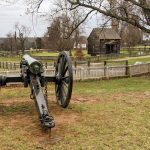 Your mind’s eye will get a workout at the Petersburg National Battlefield Park. Or it should, because let’s be honest, although it was a consequential place in American history, there’s not much to look at. My mind’s eye took me back to July 30, 1864, when Union troops detonated 8,000 pounds of explosives in a 551-foot-long underground tunnel they’d dug under Confederate … END_OF_DOCUMENT_TOKEN_TO_BE_REPLACED The darkness sweeps beside me broken only by the single headlamp and the glow from the gauge cluster. Traffic disappears and the Royal Enfield Continental GT 650 seems a bit more eager thanks to the cool night air it’s inhaling. Sometimes I become so accustomed to the flying sensation of riding a motorcycle I fail to take a moment to enjoy it, especially when you ride nearly … END_OF_DOCUMENT_TOKEN_TO_BE_REPLACED