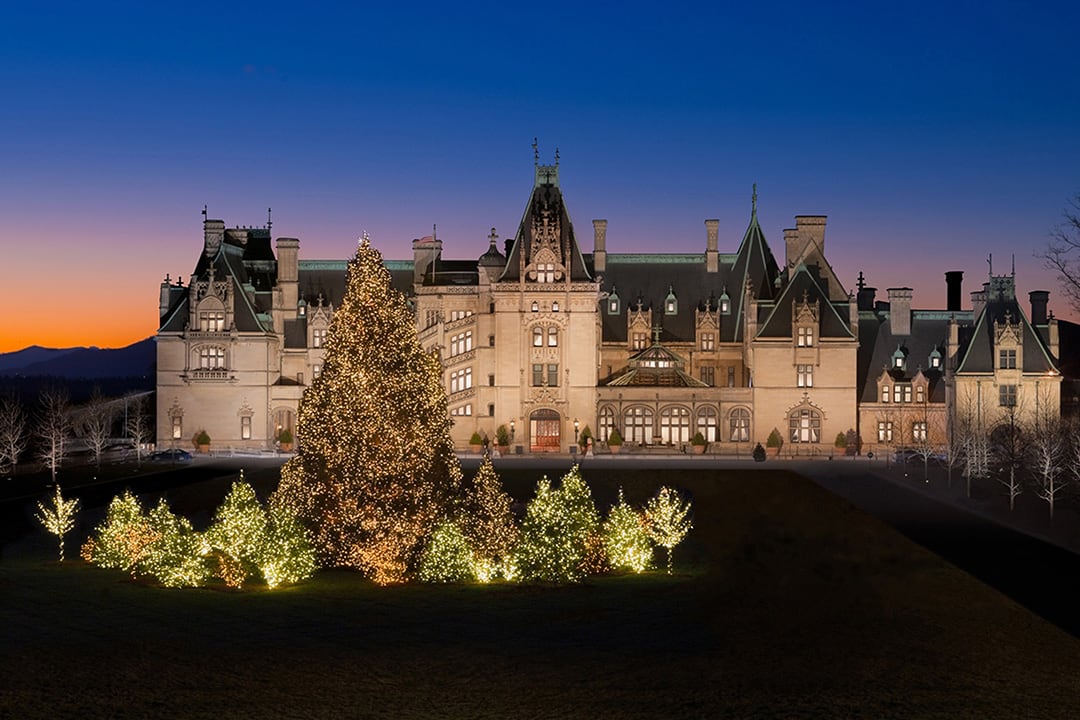 Riding a motorcycle can be transcendent, even more so when you round a corner to spot the most magnificent private home in America. The Biltmore Estate in Asheville, N.C., makes the perfect riding destination in any season, but holds a special charm during the holidays.

“Christmas at Biltmore is one of the most magical times of the year on the estate,” said LeeAnn Donnelly, senior public relations manager for Biltmore. “One of my favorite aspects of the holidays at Biltmore is that we strive to provide an experience for our guests that is authentic to the first time George Vanderbilt entertained friends and family at his new home.”

Every year, Biltmore transforms into an unforgettable holiday destination, Donnelly said. This year, the estate’s theme of “The Art of Christmas” highlights the artwork and world travels of Vanderbilt as he built his collection. Amid the fine art and furnishing, more than 100 Christmas trees fill the 250-room chateau and its manicured grounds.

Just a few streets down from the grand entrance to the estate is Eurosport Asheville, the area’s BMW, KTM and Husqvarna dealership. On any given day, motorcycles from across the nation stop in to the shop while touring Biltmore and the surrounding Blue Ridge Mountains. Pat O’Hara, riding a 2012 BMW R1200 GS bearing Florida tags, stopped in Eurosport Asheville recently. The Sarasota resident rode up from the Sunshine State to tour Biltmore and sample the great roads of Western North Carolina.

“Oh, it’s beautiful,” O’Hara said of Biltmore. “Just walking through all the gardens, it’s pretty impressive he built all that.” He recommends dining at Biltmore’s Stable Café, the estate’s former horse stables now turned into a bright and airy restaurant serving Appalachian comfort food. “Really good food and kind of quaint, you’re eating inside of a stable.”

Many of the holiday decorations today are inspired by the selections Vanderbilt made in getting his home ready for yuletide guests, Donnelly said. Vanderbilt was a bachelor when moved into Biltmore House in 1895, just a few months before the holidays. This holiday season, 7,000 golden ornaments of various sizes will hang from the winery’s ceiling — giving guests the feeling of being inside a bottle of sparkling wine.

“Christmas at Biltmore is traditionally our most visited time of the year. Within that time frame we welcome around 400,000 guests,” she said. The estate welcomed around 1.5 million visitors last year. “A team of around 50 employees raises a 34-foot-tall Fraser fir tree in the hall,” Donnelly said. “They decorate it with 500 lights, 500 ornaments and 500 wrapped packages. Our guests often stop in their tracks when they enter the Banquet Hall and realize the sheer size of the tree.”

Motorcyclists shouldn’t miss the chance to ride the access roads on the 8,000-plus acre estate grounds, where they can stop to dine at some of the many restaurants in Antler Hill Village or even try horseback riding at the equestrian center.

“It’s great, all the back-country and canopy of trees. All the twists and turns,” O’Hara said after touring the grounds on his BMW.

Gary Cox, a parts manager with Eurosport, has been a season pass holder for 10 years. “Biltmore, the whole estate, it’s just so much more than just a large house,” said Cox, who also rides an R1200 GS. “Good food. Every motorcyclist wants to eat good food, and they have five restaurants I believe on site.”

Much of the original estate’s land would become part of Western North Carolina’s best motorcycling roads. The Blue Ridge Parkway and Pisgah National Forest were once part of Vanderbilt’s original 125,000 acres. The scenic drives on the estate, now measuring 8,000 acres, offer spectacular views of the house, the rolling fields, bass pond and meandering French Broad River.

“If you take a look at it in today’s world. It’s such a remarkable piece of history: to build such a grand house and still have it present with all of this development around it,” said Asheville resident Patti Braski, a frequent Biltmore visitor. “Nothing is artificial. I like that because artificial is so prevalent today. The fact that they’re keeping it traditional with the large tree lends itself to family and warmth. It’s what the holidays are about.”

Motorcycle travelers can make Biltmore their holiday headquarters for exploring the scenic roads of the Blue Ridge Mountains. The estate features two hotels and a historic cottage available as lodging, so riders can combine unparalleled scenery with luxurious accommodations. In addition, visitors may tour Antler Hill Village and the estate’s winery.

“I thought it was fascinating that their old dairy barn is now their winery. They found the temperature in the underground portion of the dairy was suitable for wine,” Braskie said. “They seem to value the land and the richness of their surroundings.”

The impressive setting played host of BMW Motorrad’s press launch of the new K1600 B bagger last year. Motorcycle journalists from several countries spent two days riding the new Beemer around the estate and Western North Carolina’s inviting mountain roads. And in 2013, the national BMW Riders Associated attracted 3,500 motorcyclists to the grounds for their annual rally.

“At Biltmore, you can go every other weekend and see something different, hike a different trail,” said Eurosport General Manager Justin Roberts. “You can come in here every other day and see new items. It’s a top-level experience over there, and that’s also what we offer to the two-wheeled world. That’s what we shoot for. You’re becoming a part of a bigger adventure.”