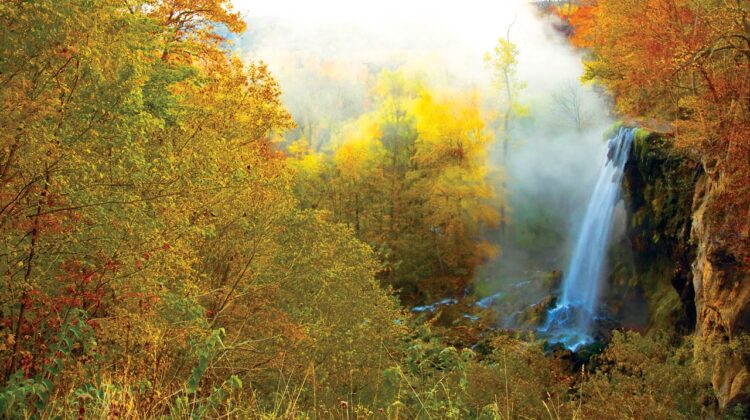 The Blue Ridge Mountains are home to some of the most popular waterfalls in the eastern United States. Many are easily accessible for motorcycle travelers and make for great day trips or extended tours.

As autumn arrives, the changing leaves frame these stunning cascades in brilliant colors. Some waterfalls may require parking fees while others are easily viewed from the roadway.

One of Western North Carolina’s most popular and picturesque waterfalls, Looking Glass Falls along U.S. 276 between Brevard, N.C., and the Blue Ridge Parkway, attracts thousands of visitors each year. There’s easy parking next to the river and access to the base of the falls.

The road next to Looking Glass Falls passes through the Pisgah National Forest following the Davidson River upstream and is a favorite among riders completing the “Copperhead Loop” of U.S. 276, N.C. 215 and U.S. 64.

Also on U.S. 276, the 85-foot Connestee Falls located 6 miles south of Brevard, N.C., is easy viewed from the top with a short boardwalk from the roadside parking area. Two waterfalls actually join to form a third drop. From the overlook, you can view Batson Creek Falls joining Carson Creek to form a third drop.

The falls are named for the vanished Native American village of Kana’sta, which was first visited by British troops in the early 1700s. When the Anglo explorers returned a few decades later, the village and its inhabitants had vanished. One myth says the vanished native inhabitants passed through the waterfall into another realm.

James Mooney’s 1902 book “The Myths of the Cherokee” recounts a legend where members of the Cherokee were invited to visit the Connestee people, who led them into a cave next to the waterfall. Inside they found another world, an open country and houses ranged in long rows. The Connestee invited their guests to come live in their otherworldly village, but one man refused. Upon his exit, he looked back to see not a cave, but a solid rock wall. No one since the British expedition in the 1700s has seen the Connestee people. For whatever reason, they simply migrated elsewhere — or vanished into a hidden realm behind solid rock. From the observation deck atop the falls, peer down into the gorge. There just might be a entrance to another realm down there.

One of the most stunning series of cascades is Whitewater Falls on N.C. 281 south of U.S. 64 in Sapphire, N.C. With a 411-foot plunge, Upper Whitewater Falls in North Carolina is one of the highest waterfalls east of the Rockies. The shorter of the two falls, located two miles south, measures 200 feet and flows through South Carolina’s Sumter National Forest.

A large parking area also contains restrooms. A paved walkway is just a short hike to a breathtaking overlook. A staircase allows hikers access to the base of the upper falls.

The river flows south to become Bad Fork Reservoir and Lake Jocassee, both scenic stops worth exploring. Devil’s Fork State Park at the southern end of Lake Jocassee makes for a great stop with its visitor’s center, sandy beach and picnic areas.

A tour through the Cullasaja Gorge along U.S. 64 between Highlands and Franklin, N.C., takes riders to two popular roadside waterfalls, Bridal Veil Falls and Dry Falls.

An old section of U.S. 64 once ran underneath Bridal Veil Falls. Visitors can now walk under the lightly flowing cascade. Just a mile west is Dry Falls where a winding walkway takes visitors beneath the 75-foot waterfall. The roadside attraction also features and easy-to-access roadside observation deck perfect for taking pictures of the falls.

Another waterfall, Cullasaja Falls, is also visible from the narrow, cliffside roadway as U.S. 64 makes its way through the scenic gorge.

Moonshiner 28 joins this section of U.S. 64 as the two-lane 28 makes it way up the Blue Ridge Escarpment from Seneca, S.C., to Deals Gap to terminate at U.S. 129, The Dragon.

The breathtaking 80-foot Falling Spring Falls serves as a highlight of a ride through Virginia’s Alleghany Highlands. The scenic waterfall near Route 220 is just five miles north of Covington, Virginia, and features a scenic overlook and picnic area from which to enjoy the view.

Thomas Jefferson described the Falling Spring Falls as a “remarkable cascade … falling over a rock about 200 feet to the valley below.” One of the largest falls in Virginia, it cascades from an overhanging ledge, and is visible from the roadway.

One of north Georgia’s most scenic waterfalls is Toccoa Falls, located on the campus of Toccoa Falls College. Admission is gained for a small fee by going through the campus bookstore to a well-kept walkway to the 186-foot waterfall.

Tragedy struck this campus in November 1977 when a dam forming Kelly Barnes Lake upstream burst sending a deadly deluge over the falls and killing 39 people sleeping in their homes downstream.

Just 20 miles north is Tallulah Gorge, another north Georgia attraction featuring a state park overlooking a series of waterfalls tumbling their way toward the Chattooga River along the Georgia/South Carolina line.

The 90-foot Bald River Falls near Tellico Plains, Tennessee, can be viewed from River Road off the famed Cherohala Skyway, an excellent motorcycle route for riders exploring east Tennessee.

The Cherohala Skyway, named because it crosses the Cherokee and Nantahala national forests, runs 43 miles from Robbinsville, N.C., to Tellico Plains. It’s sweeping corners and scenic views make for one of the most memorable motorcycle excursions in the region.