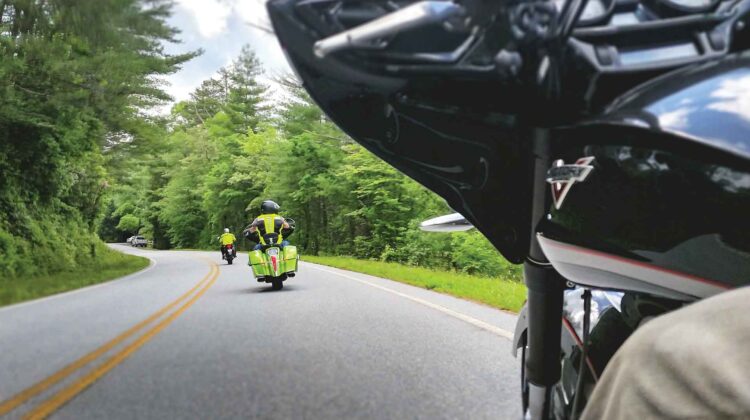 Johnson City, with its towering sign above downtown, appears on the horizon as I trek west from the Blue Ridge Mountains. Each year, I return to this charming town in northeast Tennessee to continue my exploration of The Southern Dozen, a collection of motorcycle routes branching out from the city created by local tourism officials to showcase the region.

“The Southern Dozen is perfect for any rider because you can make it what you want, when you want,” said Jenna Lafever, the director of sales and PR for Visit Johnson City. “If you’re looking for more advanced riding with tight switchbacks, we’ve got that. If you want a more laid-back ride on sweeping curves through the mountains, we’ve got that, too. The rides are mapped out turn by turn so motorcyclists can take advantage of our scenic routes year-round.”

On this particular spring day, I’m venturing north from Johnson City to head into the corner of Virginia to see one of the region’s natural wonders. The Southern Dozen calls it the “8th Wonder of the World.” Passing through Kingsport and Gate City, Virginia, the scenic backroads take you to Natural Tunnel, an opening in the ancient mountainside where visitors for centuries have marveled at the towering cliffs and streamside opening in the rock face.

A chairlift ride takes you from the welcome center atop the gorge down to the railroad line, still active after a more than a century of use. From the creek-side walkway, I look up at the sheer rockface with awe and marvel at Mother Nature’s magnificent sculpture.

In addition to the abundance of great motorcycle roads, The Southern Dozen features several routes that history buffs will find interesting. This part of the Southern Appalachians holds a rich and significant past. In previous journeys, I’ve used the Southern Dozen routes to visit some notable places.

The “Mountain Ribbons” and “Top of the Roan” routes took me across the Blue Ridge in the footsteps of the heroes of the American Revolution, The Overmountain Men. At Sycamore Shoals State Historic Area in Elizabethton, Tennessee, I stop to admire the commemorative statue of an Overmountain Man stationed outside the park’s visitor center. This historic gathering point for the famous march over the Blue Ridge Mountains to face the British during the Revolutionary in the autumn of 1780 on their way to winning the pivotal Battle of Kings Mountain.

Turning to follow the statue’s gaze, I head toward U.S. 19E, pausing briefly to admire Elizabethton’s historic covered bridge over the Doe River before climbing into the hills.

After a day’s march, the Overmountain Men arrived at Shelving Rock near the western base of Roan Mountain to camp for the night. I took me just minutes on a sport-touring motorcycle. Get too focused on carving the turns on TN 143 you might miss the outcropping with the historic plaque inset into the cliff wall. It was here the Overmountain Men, drenched with rain, stashed their gunpowder in the dry hollow and camped in a field across the stream. The Overmountain Men crossed Yellow Mountain Gap, which is now a Forest Service hiking trail. I decide to depart from the official historic motor route, which follows U.S. 19E into North Carolina, in order to cross Carver’s Gap at Roan Mountain State Park and enjoy the twisties heading up to the North Carolina state line. The view off my throttle hand improves with each turn. The temperature drops as the elevation rises. The Overmountain Men actually encountered an unexpected snowstorm in late September crossing this same ridgeline.

The state park at the summit is a convenient stop complete with restrooms. Even during the off-season, I spot other motorcyclists riding this route, which crosses the Appalachian Trail. Entering the Old North State, the vista opens before me to reveal the rest of the Blue Ridge Mountains rolling into the azure-colored distance. I wonder how the Overmountain Men felt seeing they’d only conquered the first, yet highest, in a series of mountain ridges before them.

My journeys on the Southern Dozen also featured more modern bits of history. The “Music to Your Ears” route heads to Bristol, the birthplace of country music and home to one of stock car racing’s most beloved tracks. The small town perched on the state line with Virginia features a quaint, flag-lined downtown. Tennessee flags adorn the southern sidewalk, Virginia to the north.

State Street takes you to the Burger Bar, a classic diner built in 1942. It’s the last place singer Hank Williams Sr. ate before dying on that lost highway (U.S. 19) somewhere north of here in Virginia. Across the street, a Quaker Steak and Lube also attracts fellow riders as a popular spot to gather for food and drink.

East of Bristol, one of the region’s best known and best loved motorcycling roads — The Snake (U.S. 421) — runs across the mountains to Boone. Nice weather sees it filled with motorcyclists, many of whom stop at the Shady Valley Country Store to swap stories, admire bikes and take in a little refreshment. The most challenging parts of the twisty road lie on the mountains on each side of the quiet valley, making the country store the hub of motorcycle activity as riders try to decide which compass point to chase.

“The Snake is by far the most popular ride,” Lafever said. “There are hundreds of curves and incredible scenery. I think Backbone Rock is another feature riders love along that route. My personal favorite is Mountain Ribbons. It takes you into Western North Carolina across the most iconic part of the Blue Ridge Parkway featuring the Linn Cove Viaduct. It truly is a breathtaking, scenic ride.”

The Snake slithers its way through some challenging sections toward Mountain City. This section attracts more technical riders as 421 makes a dozen switchbacks along the narrow route. Northeast of here, and worth the detour, is Backbone Rock, the shortest man-made tunnel around. This passage on Route 133 was carved to make way for the railroad into Damascus, Virginia. Today, it brings a grin to riders and motorists passing through the tiny tunnel. A recreation area and campground nearby make this a great spot for moto-camping.

Those wanting a more relaxing route can head south on Route 91 to Elizabethton, where a stop at the aforementioned covered bridge in the middle of town always makes for a peaceful rest stop. The tranquil waters of the Doe River flow under the 154-foot, white clapboard bridge built in 1882. Each June, the town celebrates the landmark with Covered Bridge Days featuring music, vendors, car shows and other activities.

Each of the Southern Dozen routes interconnect in some way, so creating your own ride combining portions of each works great if you like to see where the day — and the road — takes you without having to adhere to a schedule or map. I still have a few of the routes left to explore, which only gives me another excuse to visit Johnson City and this corner of motorcycling paradise.

“We love hosting motorcycle groups, clubs and rallies,” Lafever said. “We recognize the huge economic impact motorcycle tourism has on our community so we embrace it with open arms. Our hotels offer special rates for Southern Dozen riders and if you let us know when you’ll be in town, we’ll have a welcome bag waiting for you at your hotel. We put everything from patches, maps, cleaning cloths and more in the welcome bag.”