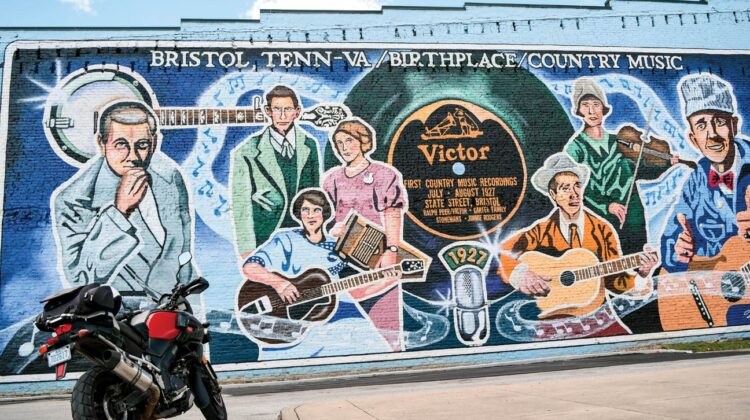 The air temperature rises as you cross to the windward side of the southern Appalachian Mountains, where heat from the Tennessee Valley blows westward. There are so many scenic motorcycling roads here that the local visitor’s center asked motorcyclists to compile a list, which became “The Southern Dozen.” They include excursions to natural wonders and local historical sites. Each perfect for a summer getaway on two wheels.

Riding across the Blue Ridge Mountains, you drop from ridgetops into a region that once was the short-lived state of Franklin. The independently minded inhabitants of what is now northeastern Tennessee feared for the fate of their mountain paradise following the American Revolution and declared themselves an independent state in 1784. It lasted only five years, but that spirit of a land distinctly different from North Carolina or central Tennessee remains.

Johnson City, the largest of the Tri-Cities in northeast Tennessee, becomes the epicenter for many a road trip into this region. From here, motorcyclists can venture into Western North Carolina and southwestern Virginia on routes available from the chamber of commerce.

Rumbling through town, the white silo towering above an old railroad depot urges “Drink Yee-Haw Beer.” Such an enticement worked, and soon it was kickstands down for a cold one as the heat of the day increased. The brewery sits on the site of the former East Tennessee & Western North Carolina Railroad depot. The narrow-gauge railroad line, nicknamed “Tweetsie Railroad,” hauled passengers across the mountainous 60-mile route to Boone, North Carolina, during the first half of the 20th century.

Today, the depot features a modern and spacious tap room, taco shop and gift corner, making it an excellent stop for riders passing through the old state of Franklin.

“I really like Johnson City, said Caity Baker, taproom manager at Yee-Haw Brewing. “It’s a good sense of community and is centrally located to Asheville, to Knoxville, to a lot of different places. It’s nestled, but it’s not too remote. It’s in its growing stages, which I really like about it.”

“We have expanded significantly in the last few years. We’re in Nashville now, Greenville, South Carolina. We have a tasting room in Pigeon Forge and we’re opening a location in Knoxville this summer,” Baker said. “White Duck Taco Shop is right next door. It’s kind of a free-flowing business. You can sit where you like and take your beer in there.”

Live music once filled the taproom in the days before the pandemic.

“Things are back on the upswing, returning to normalcy. I don’t know when we will have music again, but we will have it eventually. We’re setting up a larger music area. That’s the plan,” she said.

On the road again, I point the bike north to follow one of the Southern Dozen routes called “Music to Your Ears.” This ride heads to Bristol, the birthplace of country music and home to stock car racing’s most beloved tracks. The small town perched on the state line with Virginia features a quaint, flag-lined downtown. Tennessee flags adorn the southern sidewalk, Virginia to the north.

State Street takes you to the Burger Bar, a classic diner built in 1942. It’s the last place singer Hank Williams Sr. ate before dying on that lost highway (U.S. 19) somewhere north of here in Virginia. Across the street, a Quaker Steak and Lube also attracts fellow riders as a popular spot to gather for food and drink.

If you find natural wonders more interesting, head northwest out of Johnson City on what the Southern Dozen calls “The 8th Wonder of the World.” Passing through Kingsport and Gate City, Virginia, riders can travel to Natural Tunnel, an opening in the ancient mountainside where visitors for centuries have marveled at the towering cliffs and streamside opening in the rock face. Here, a chairlift ride takes you from the top of the gorge down to the railroad line, still active after a more than a century of use.

“It’s pretty scenic, the mountains,” said Steve Darity, a car dealer on his 2019 Harley-Davidson Road Glide who frequently rides the roads of east Tennessee. “It’s an easy ride, not a lot of traffic.”

Back in Bristol, a crowd gathers at one of the town’s more popular restaurants. Bikes fill the parking lot.

“There’s a great biker spot called Cootie Browns,” Darity said. “I think there are three in the area. (Two in Johnson City, one in Bristol). Very cool place to go. Good food, good beer. They have a very good beer selection. Even their desserts, they have a big selection.”

From Bristol, I can’t resist taking another pass on one of the region’s best known and best loved motorcycling roads — The Snake. U.S. 421 runs across the mountains to Boone. Summer sees it filled with motorcyclists, many of whom stop at the Shady Valley Country Store to swap stories, admire bikes and take in a little refreshment. The most challenging parts of the twisty road lie on the mountains on each side of the quiet valley, making the country store the hub of motorcycle activity as riders try to decide which compass point to chase.

Northeast of here, and worth the detour, is Backbone Rock, the shortest man-made tunnel around. While it bears a passing resemblance to Natural Tunnel, this passage on Route 133 was carved to make way for the railroad into Damascus, Virginia. Today, it brings a grin to riders and motorists passing through it. A recreation area and campground nearby make this a great spot for motocamping.

East from Shady Valley, the Snake slithers it way through another challenging section toward Mountain City. This section attracts more technical riders as 421 makes a dozen switchbacks along the narrow route.

Those wanting a more relaxing route can head south on Route 91 to Elizabethton, where the scenic covered bridge in the middle of town always makes for a peaceful rest stop. The tranquil waters of the Doe River flow under the 154-foot, white clapboard bridge built in 1882. Each June, the town celebrates the landmark with Covered Bridge Days featuring music, vendors, car shows and other activities.

The rides of the Southern Dozen head in every direction, and each rewards a motorcyclist with a memorable day on two wheels. While the State of Franklin existed for only a few brief years, the state of the area’s motorcycling opportunities seems eternal and everlasting.

“With the curves and the beautiful scenery, it just is a rider’s paradise,” Brenda Whitson, executive director of the Johnson City Convention and Visitor’s Bureau, told Blue Ridge Motorcycling Magazine in 2019. “This is where you come to ride. You’re not riding interstates all the time. You’re on the backroads, and you can decide for yourself if you want something slow-and-easy or want something a little more challenging.”