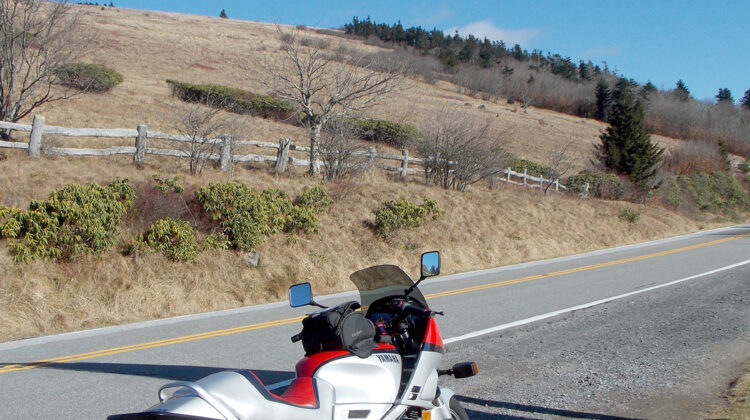 The bronze frontiersman statue stands with rifle poised facing southeast toward the towering Blue Ridge Mountains and a fateful battle 150 miles away that helped win independence from English rule.

At Sycamore Shoals State Historic Area in Elizabethton, Tennessee, I recheck my maps and nod to my silent friend stationed outside the park’s visitor center. This historic gathering point for the famous Overmountain Men during the Revolutionary War is part of the “Southern Dozen” motorcycle routes developed by tourism officials in nearby Johnson City. Picking and choosing from the Southern Dozen rides, I craft a more ambitious route — to retrace the famous Overmountain Men’s crossing in the autumn of 1780 on their way to winning the pivotal Battle of Kings Mountain.

Turning to follow the statue’s gaze, I squint into the morning sun at the hazy mountain range and thumb the start button on my vintage steed for this journey — my recently acquired 1984 Yamaha FJ1100 sport-touring bike. The inline-four barks to life startling the few park-goers, and I head toward U.S. 19E to follow the path of history and pausing briefly to admire Elizabethton’s historic covered bridge over the Doe River before climbing into the hills.

The covered bridge in Elizabethton, Tenn., makes a great spot to rest during a tour of east Tennessee.into the hills.The Overmountain Victory National Historic Trail features a commemorative motor route with a downloadable map available from the U.S. National Park Service showing the 330-mile trek from Abingdon, Virginia, to Kings Mountain State Park in South Carolina. I decide to mix parts of the actual march with the modern roadway routes to explore some of the notable sites.

The Overmountain Victory militiamen were mostly settlers, who by residing south of the Holston River were in violation of a treaty between the British and the Cherokee. They resisted Loyalist rule. English Maj. Patrick Ferguson demanded they comply or he would “march his army over the mountains, hang their leaders, and lay waste the country with fire and sword.”

“Strange as it may seem, Upper East Tennessee, which was part of North Carolina at the time, was more populated with white people than most of N.C. west of Salisbury. They were also the ones specifically challenged by Ferguson with ‘fire and sword,’ and they were not the kind of people who let a challenge pass by the wayside,” said Daniel S. Pierce, a professor of history at the University of North Carolina at Asheville.Pierce, a scholar of Appalachian history, is the author of several books examining the rich culture of the Blue Ridge Mountains, including “The Great Smokies: From Natural Habitat to National Park,” “Corn in a Jar: Moonshining in the Great Smoky Mountains,” and “Real NASCAR: White Lightning, Red Clay, and Big Bill France.”

“I’ve been on a motorcycle very few times, and I believe I wrecked every single time,” the historian joked when I outlined my plan to retrace the battle march on two wheels and visit some of the remaining historical sites.

In late September 1780, a thousand men from across what is now Tennessee and southern Virginia gathered in Elizabethton and began their slow march eastward. “Considering they had to cross the mountains, it would have been an arduous trek, but these were people accustomed to long walks, and they also had pack horses to carry equipment,” Pierce said.

After a day’s march, the Overmountain Men arrived at Shelving Rock near the western base of Roan Mountain to camp for the night. Carving the turns on TN 143 on my eager Yamaha, I blast past the outcropping only noticing the historic plaque inset into the cliff wall as it speeds by my right elbow. A quick U-turn and I rumble up to the shallow outcropping, which is now on the National Register of Historic Places, and dismount. It was here the Overmountain Men, drenched with rain, stashed their gunpowder in the dry hollow and camped in a field across the stream. Silence fills the air. I wander around the narrow, litter-strewn roadside imagining a thousand militiamen filling the nearby field, anxious to face down their red-coated bully.

The next day, the Overmountain Men crossed Yellow Mountain Gap, which is now a Forest Service hiking trail. I decide to depart from the official historic motor route, which follows U.S. 19E into North Carolina, in order to cross Carver’s Gap at Roan Mountain State Park and enjoy the twisties heading up to the North Carolina state line. The view off my throttle hand improves with each turn. The temperature drops as the elevation rises. The Overmountain Men actually encountered an unexpected snowstorm in late September crossing this same ridgeline.

The state park at the summit is a convenient stop complete with restrooms. Even during the off-season, I spot other motorcyclists riding this route, which crosses the Appalachian Trail. Entering the Old North State, the vista opens before me to reveal the rest of the Blue Ridge Mountains rolling into the azure-colored distance. I wonder how the Overmountain Men felt seeing they’d only conquered the first, yet highest, in a series of mountain ridges before them.After crossing Yellow Mountain Gap in the snow, the militiamen camped the second night along Roaring Creek. I backtrack a bit on U.S. 19 to find the original route, slowing only to admire a flock of turkeys pecking their way across a cow pasture as the cattle ignore them. Near a small white, tin-roofed church, I turn up Roaring Creek Road to where the 1780 expedition camped on the second night.

The road turns to gravel and narrows to one lane at it rises to the U.S. Forest Service lands straddling the spine of the Appalachian range. I start to miss my adventure bike, but the Yamaha manages with just a minimum of (mostly precautionary) footwork. The road ends at a small parking area. A sign banning motor vehicles designates the hiking route as the Overmountain Victory Historic Trail, and I’m left to admire to the grassy wagon track heading into the woods with only the sound of the ticking exhaust on my FJ1100 and the burble of a small creek for company.

I return to the commemorative motor route (U.S. 19E) and let the Yamaha howl its way up through the gears as I follow the North Toe River downstream. The 34-year-old carbs don’t like to putter at idle speeds for very long. I arrive in Spruce Pine and reflect that the bike covered in a couple of hours what it took the Overmountain Men three days to accomplish. The historic motor route points me to N.C. 226 south to conquer the next mountain range.

I reach the summit at Gillespie Gap near Little Switzerland and take a break at the Museum of North Carolina Minerals adjacent to the Blue Ridge Parkway. In a quiet patio behind the museum stands an obelisk with bronze plaque affixed celebrating the Overmountain Men and the spot where they crossed the ridge. This intersection of N.C. 226, 226A and the Parkway proves popular with fellow motorcyclists. It’s here where N.C. 226 divides into the main road and the old route, N.C. 226A, known to riders as “The Diamondback.” The Overmountain Men also split up and took two different paths to descend the Blue Ridge Escarpment. As I sit atop a 1,100cc sport-touring bike, the choice for me was obvious: the twisty Diamondback.

The narrow road drops off the escarpment in a steep, tree-lined paradise for corner-carvers: 190 turns in 12 miles before depositing you on U.S. 221north of Marion. From there, I consult my trusty Commemorative Motor Route map and head east to seek out N.C. 126 to follow the north shore of Lake James, a manmade lake now covering what was the original route of the Overmountain Men. By the lakeside, I park and gaze behind me at the dark western mountains. What has been a joyful day of riding for me, was a week’s struggle for the Overmountain Men. In nearby Quaker Meadows in Morganton, they would reconvene with separated groups, oust their unpopular commander, and begin searching for the enemy.

Not knowing for sure where the British forces were, the Overmountain Men trekked onward through Rutherfordton to Mill Spring, misinformed the British were heading deeper into Upstate South Carolina. My Yamaha makes quick work of the trip down U.S. 64 and N.C. 108, where the road rolls gently through the countryside with views of the towering Blue Ridge Escarpment on the horizon.

The Yamaha needs fuel, so I stop along Highway 9 in Mill Spring and ponder the remaining portion of the trek. With darkness falling, I decide to leave the last stretch across the flattening Piedmont to Kings Mountain State Park for another day’s ride. Rationalizing my decision, I tell myself I’ve already done the “over mountain” part, enjoyed the curvy roads through the mountain passes and paid my respects to the frontiersmen to whom we owe our liberty.

To the south, N.C. 9 leads to the Palmetto State, where the Overmountain Men camped at Cowpens near the town of Chesnee 11 days after leaving Sycamore Shoals in Elizabethton. The next day, Oct. 7, 1780, they would charge the British forces hunkered down atop Kings Mountain and forever alter American history.
“Hugely significant,” Pierce says of the battle. “Indeed, alongside Saratoga, it was one of the most significant battles of the war. At the time, Cornwallis was moving unimpeded through the Carolinas. It looked as if the British were unstoppable and morale was extremely low.”

Historians say Patriot sharpshooters managed to kill Maj. Patrick Ferguson, the man who threaten to conquer the mountain settlers by fire and sword. More than 300 Loyalist soldiers were killed or severely wounded and nearly 700 captured during the battle. The Overmountain Men and their fellow Patriots only lost 28 men with 62 wounded.

“With the victory, and the follow-up victory at Cowpens, the Patriot militia was able to stem the tide of Loyalism in the region,” Pierce said. “Cornwallis hemorrhaged men and supplies and ended up limping to the coast. This made it fairly easy for Washington to mop things up at Yorktown. Kings Mountain began this process. It was HUGE!”