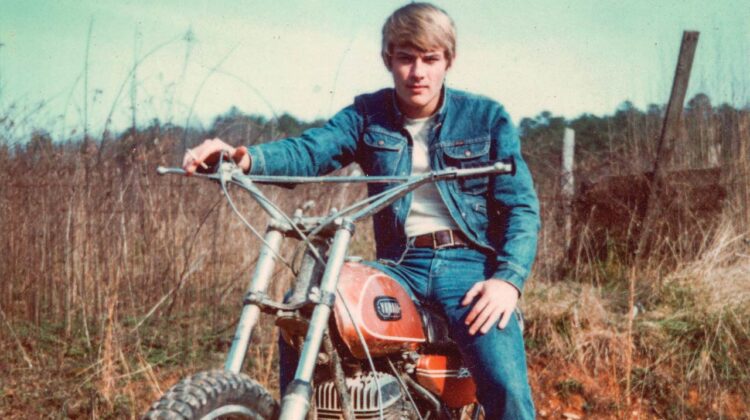 Mountains surround the McDowell Country, N.C., home that Steve Duncan — a semi-retired woodcarver — shares with his wife and daughter. The woods are dense with oaks, poplars, dogwoods and pines, and the air is pungent with the scent of galax. Evening comes early here in the shadows of the trees, and even on summer days the breeze off the creek in front of Duncan’s house is cool.

As a boy, he lived in the shadows of these same woods, and he explored the rugged trails on foot or motorcycle.

His interest in motorcycle riding was stirred by watching that classic movie “The Great Escape.” Even today, he displays a framed poster depicting a scene from the film — Steve McQueen sitting on a Triumph modified to look like a German World War II-era BMW.

Around the age of 10 when Duncan first saw “The Great Escape,” he also acquired his first motorcycle.

“It was a three-horsepower minibike that came from a local auto parts place,” he said. It had a Lawson engine, and he enjoyed riding the minibike in the woods around his house.

As a teenager, Duncan honed his riding skills at an abandoned gravel pit near the Catawba River — a large field with mounds of gravel and sand. He, his friends and a few older riders congregated there to test their abilities.

“It was like our desert course,” he reminisces. At the time, he admired Southern California desert racers like Lee Marvin, Keenan Wynn, and Steve McQueen, celebrities he read about in motorcycle magazines.

“We’d do wheelies and jump over piles of sand,” Duncan said. “When it snowed, we really had a ball because we’d ride in the snow, power sliding. When we got wet, we’d go to Gibson’s General Store to sit by the potbelly stove, eat cheese crackers and drink coffee, and dry out. Then we’d go back and ride again.”

During this same time, he became a competitive rider.

“I raced motocross at Steele Creek on the North/South Carolina border. I was sponsored by Yamaha of Asheville and raced in the 250 class. I rode a 1970 Yamaha 250 MX.”

A trophy still stands on a shelf in a storage room at Duncan’s house, attesting to his skill at motocross racing.

“I also ran several flat dirt track races at the I-26 Raceway near Hendersonville on a 1968 Triumph TR5. This track was faster than motocross.”

In his late teens, Duncan participated in motorcycle trials in Gainesville, Georgia. Here he maneuvered his Honda Trials 125 through the woodsy obstacle course, crossing logs and rocks, trying not to set his feet down as he confronted these traps.

“That was the end of my motorcycle competitive life. I didn’t have the time.”

Yet he continued to enjoy motorcycle riding. What he especially liked about woods riding was constantly seeing wildlife, seeing what was around the next ridge and clearing trails.

He also enjoyed riding some of the more challenging trails in the county, such as the Narrow Knob.

When he tackled this terrain, he rode a small trail bike, such as a Hodaka Ace 100 and later a Yamaha 250 Enduro. But one day he rode a Honda Trials 125 and had a harrowing misadventure.

“I was riding by myself, and I ran off the trail into a very steep rocky and ivy-choked ravine,” he said. “I had to turn the motor off and drag the bike one end at a time back up to the trail. It took about an hour. I had a few bruises and scratches, but otherwise I wasn’t hurt.” 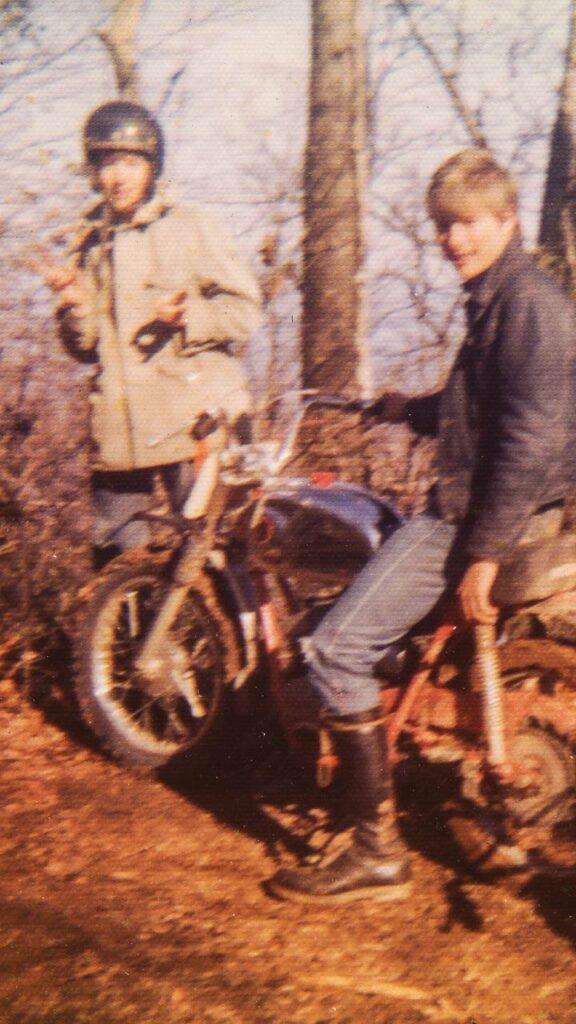 One of his favorite places to ride was down through Chestnut Cove. After going through the Narrow Knob, the trail went down into a cool, dark flat. The ground was like potting soil, covered by fern, galax, and other plants that gave off an almost sweet smell. Giant hemlock trees blocked the sun. Lying on the ground were logs of dead chestnut trees, killed by blight many years before.

“If you took a hatchet and cut beneath the rotten-looking surface, a beautiful golden-brown grain was revealed,” Duncan said. “This part of the Pisgah National Forest was a bear sanctuary, so my friends and I often saw young bears darting across the trail and up a tree. There were also timber rattlers, and you had to be careful where you set your feet down.”

He used to wear knee-high lace-up boots called linesmen’s. They offered good protection for the feet and lower legs. After Chestnut Cove, the trail turned up into the head of Curtis Creek. From there it was a short distance to the Blue Ridge Parkway where they would enjoy a snack break before heading back.

“The most well-balanced, best-handling woods bike I ever had was a Spanish-built Montesa King Scorpion,” Duncan said of all the bikes he’s owned. “It had a red fiberglass tank and a chrome-plated frame.”

He rode this motorcycle when he performed stunts, some that had unexpected rewards.

“I have a fond memory of the Jumbo Grill, a 1950s-style café in Marion that was run by a large man Ed Hester, or Big Ed, as we called him. Big Ed was fascinated by our dirt bikes and always welcomed us and was happy that we made his joint our headquarters. Back then, you could ride a stripped-down dirt bike on the road if you tagged it for daylight use only.

“Big Ed would often get me to do wheelies, standing on the seat, in the parking lot. One day he was sitting in his booth talking with a friend, and I could tell he was talking about me. I heard the other man say, ‘No way. I’d love to see that.’ Big Ed said, ‘Hey, Duncan, do me a wheelie in the parking lot.’ I went outside, fired up the Montesa, and made a few laps around the lot and then sat it back down. When I went back inside, on the table in my booth were a complimentary burger, fries, and Coke. The Jumbo Grill made the best burgers in the county with slaw, chili, mustard, and onions on a soft steamed bun. We all practically lived on them.”

Duncan’s most recent motorcycle was a newer Triumph Bonneville, a replica of the 1968 model, which he occasionally rode on the congested highways near his home. A few near-accidents caused by negligent drivers spooked him, but a couple of years ago he decided to sell the Triumph to help buy his daughter her first car. The sacrifice was bittersweet.

Today Duncan sits on his front porch and looks across the road at the woods.

“I would like to be able to ride in the woods again,” he says. “I often think back on those golden years of good friends, blue skies, colorful autumn leaves, and a cool nip in the air. No better time could young men have.”