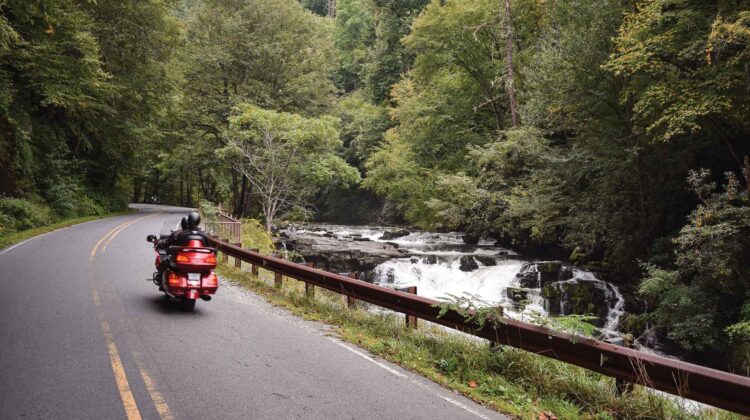 The Cherokee named it Nantahala, which means “land of the noon-day sun.” Here the namesake river runs through a shaded gorge with little direct sunlight through the largest of North Carolina’s four national forests. In summer, when the earth’s tilt allows for more of the sun’s rays to hit the river, kayakers and rafters fill the chilly waters following through the valley. In winter, the bare trees reveal castles of rock towering along the hills above.

Heading west, the highway drops down to the riverbed where motorcyclists can enjoy a lunch at the expansive Nantahala Outdoor Center along U.S. 19/74. The rumble of a train chugging along the steep hillside is heard, and soon tourists can be seen waving from the windows of passenger cars as the Great Smoky Mountain Railroad makes another excursion through the gorge.

“Nantahala Outdoor Center’s 500-acre campus is nestled in the Nantahala Gorge, just steps off the Appalachian Trail and right on the Nantahala River,” said Kristin Kastelic, the marketing director for Nantahala Outdoor Center. “Whether guests are visiting for an adventure or just passing through via Route 19, they are always captivated by the scenic views, the delicious meals, and the southern hospitality. Visitors can enjoy a delicious meal at two onsite restaurants, where every seat has a view of the river, shopping at the Outfitter’s Store, or adventuring out on a whitewater rafting trip, mountain top zipline tours.”

Unlike the hectic crowds of Deal’s Gap to the north, exploring Nantahala National Forest offers challenging roads in a more relaxed setting with abundant natural beauty. Once the leaves fall, U.S. 19/74 sheds much of its rafting traffic, leaving an open ribbon of tarmac snaking along the tumbling waters. Plenty of roadside pull-offs allow riders to stop and take a moment to look up at the rocky sides of the gorge and listen to the river whispering its ancient song. Every few minutes, a rafter passes silently down river.

“We have been rafting and paddling with NOC,” said David Todd, who with his wife, Sheri, spent a recent afternoon exploring the gorge by motorcycle and stopping for lunch at NOC. “The rafting is great for a first-timer. My wife and I are more adventurous, so we took a two-person rubber ducky. Lots of fun and we even made it through the big rapid at the end of the run.”

Todd’s 2017 BMW R1200R, bristling with GoPro action cameras, filmed a steady stream of motorcyclists passing through the gorge on a sunny afternoon. His wife’s Yamaha MT03 seemed to capture the attention of more than a few onlookers in the rafting center’s parking lot. The 321cc naked bike, with its low seat height, sparked conversations with a couple of former riders now contemplating returning to the hobby.

Besides bike-watching, the grounds of NOC offer a pleasant place to sit by the river or join in some of tours and activities hosted by the company.

“I’ve also taken a kayak class with the NOC Paddle Sports School,” Todd said. “We paddled the Little Tennessee and the Tuckasegee rivers. In addition to the rafting and kayaking, you can go zip lining, mountain biking and caving.”

The Todds and their riding companions followed the river upstream. The waterway features eight miles of rapids, swift currents and a winding road follows alongside for much of it.

Wayah Road departs from the main road to climb up to Nantahala Lake, a serene mountain reservoir built in 1942 to generate power for the region. The road offers tranquil views of the forest as it crisscrosses the river on its way to the mountaintop. As Old River Road meets Wayah Road, a small waterfall entices riders to pull off on the dirt road to enjoy the view and maybe snap a few photos.

During certain times of the year, Duke Energy releases the water from the reservoir above, bringing the falls to life and creating the challenging rapids kayakers and rafters downstream crave.

“It was really cool going through the gorge,” said Zoe Kelly, a new rider exploring the region on her 2014 Suzuki Boulevard S40 with a diverse group of riders. “It started drizzling on us, but I would like to do it again and again. You see all the kayakers and tourists. I like riding with people, so having a group of us was really cool, stopping to check out all the places. It was nice riding with other women. We all have different bikes and different styles.”

Wayah, which means “wolf” in Cherokee, becomes a road filled with tight turns and steeper elevation changes south of the lake. Sport riders usually prefer to run the route northward uphill from Franklin. For adventure riders, a detour up a Forest Service dirt road to Wayah Bald affords riders a stunning 360-degree view from the stone observation tower atop the 5,385-foot summit along the famed Appalachian Trail.

The descent from the top of the ridge becomes more challenging, making Wayah Road a favorite for spirited riding. The road lets you relax as the valley floor expands. Soon it arrives just west of Franklin, the county seat of Macon County and perfect spot to enjoy a meal and plan the next leg of your mountain adventure ride.

“Riding Wayah Road is a motorcyclist’s dream, coming into those twisty, switchback curves,” Kelly said. “As a new rider, I was a little nervous, but it was a lot of fun.

Refueling at a gas station on Main Street, a curious rider will notice the ancient Nikwasi Indian Mound, a grassy oasis in the middle of town that stood as a ceremonial center a thousand or more years ago. Historians say a delegation of English officials signed an accord with the Cherokee atop the mound in 1730. Archeologists have identified 50 such mounds in Western North Carolina, many of them near rivers and streams where winding roads often follow. 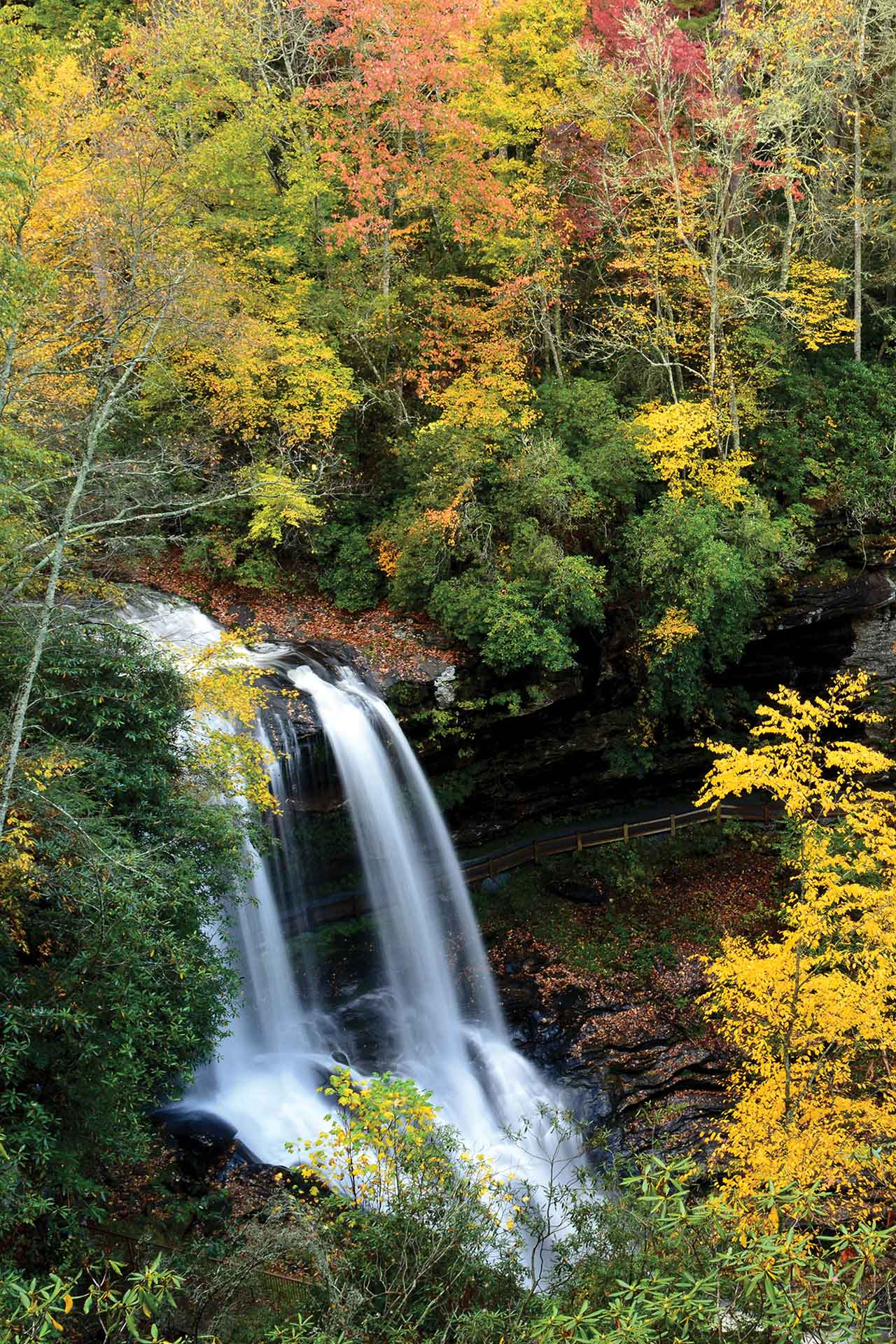 Franklin makes a great basecamp for a weekend motorcycle getaway. Some of the best — and least known — motorcycle roads are within 30 miles, offering the winter rider the bliss of empty roads and stunning scenery. The town also offers off-bike fun, especially for rock hounds. Mining for precious stones, mostly rubies and sapphires, dates back more than 150 years in the area, and several visitor-friendly gem mines allow visitors the chance to hunt for a keepsake stone. There are two gem museums in downtown, displaying thousands of precious stones from the region, including a huge two-pound ruby.

“Some of the most popular outdoor attractions in and around Franklin this time of year are a trip to Wayah Bald Tower for the scenic views at the nearly mile-high tower,” said Eric Haggart with the Franklin & Nantahala Tourism Development Commission. “Another popular outdoor attraction is the Mountain Waters Scenic Byway through the Cullasaja River Gorge for the fall foliage and stunning waterfalls.”

This popular motorcycle route east of Franklin takes riders along U.S. 64/N.C. 28 up through the Cullasaja Gorge, where the road hugs the cliff face above the tumbling waters of the river below and winds past several stunning waterfalls, including Dry Falls and Bridal Veil Falls.

Traffic can be heavy and slow-moving on this scenic route during certain times of the year, so savvy motorcycle enthusiasts often turn off on little-known Ellijay Road, a small country lane that summits the ridgetop to become Tilly Creek Road and drop riders down into Cullowhee on N.C. 107 at the Tuckasegee River. Head south on 107 and visit the mysterious Judaculla Rock, an ancient Indian petroglyph filled with strange lines and cupules — and reportedly the six-fingered handprint of the mythical giant Judaculla.

The winding mountain route also passes Lake Glenville, where a detour on Pine Creek Road takes travelers to the Pines Recreation Area, a paved parking lot next to restrooms and a sandy beach with impressive views of the lake, perfect for picture-taking and leg-stretching.

Just south, the road meets up with U.S. 64, a highway that becomes part of The Southern Highroads Trail. The Tennessee and North Carolina sections of this 364-mile scenic loop runs through Franklin, meeting up with country roads and U.S. 76 in Georgia to take riders across parts of four states and four national forests.

“It’s beautiful. I see why North Carolina is such a hot spot for bikers,” Kelly said.