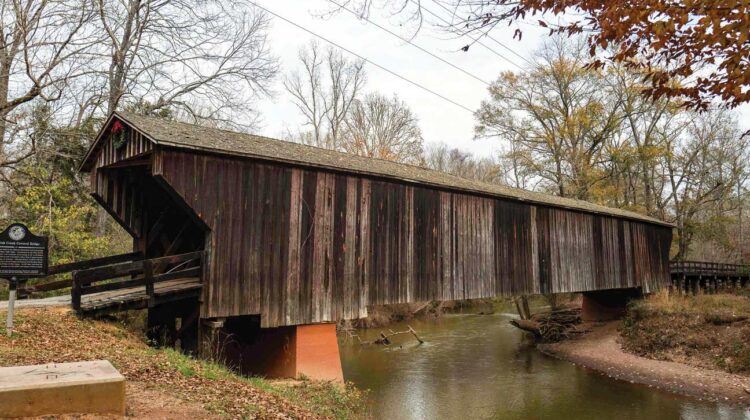 I’ve ridden all across North America via motorcycle, mostly wandering aimlessly with no particular destinations in sight. From months-long summer trips visiting national parks, to riding to the Arctic Ocean, even traversing single track at 12,000-foot above sea level in Colorado, experiencing things via motorcycle is unlike any other way of traveling in my opinion. It’s almost as if you could add motorcycling to any equation and it make for an adventure.

How do you explore somewhere new? Sure, hopping on the bike and just picking a direction is the easy choice, I probably do that almost every weekend. But as of late I’ve fallen into the same routine of heading north from my Georgia home to the mountains for twisty pavement or the abundance of off-road trails. The best part is that it never gets old, but I find myself often thinking of the places and areas I haven’t yet visited. Sometimes it’s a daunting thought, overwhelmed by where I could go or how to intentionally choose a route. That’s when ideas of specific destinations come to mind. By seeking out certain things to visit, I was giving my riding purpose and enjoying the journey along the way.

And that is how I became interested in covered bridges.

There are 16 covered wooden bridges still standing in the state of Georgia and they are all across the state. Out of the 16., only a handful are still able to be driven over. When I had first learned we had covered bridges I was definitely surprised. I hadn’t even considered them to be a thing here, but was now excited to see for myself. The origins of Georgia’s covered bridges are rich with history and lore, most being built in the 1800s. A fascinating construction feat at the time, the purpose of a covered bridge was to protect the wooden trusses and support from rain, snow and ice to preventing rot and decay.

Being from Florida, snow and ice isn’t something bridge-builders had to deal with, so seeing covered bridges was entirely new to me. Being that they occupy regions all over the state, I figured this would be the perfect way to explore parts of Georgia I hadn’t previously visited. Covered bridges now gave me a journey to embark on, a checklist of sorts. Visiting these bridges wouldn’t be a day trip, but rather a mission I could work on at my own pace, giving my riding some purposeful intention over the next few months.

With being local to Atlanta, this put me in a central location for nearly all the bridges I chose to visit. I did not visit all 16 as some are only open to foot traffic, rather I decided to visit the drivable ones.

Just outside of the city to the northwest sits the Concord Covered Bridge. Constructed in 1872 by locals who owned land in the area, to this day this bridge sees the highest traffic count compared to all other bridges in the state combined. Being close to the city the surrounding area is quite suburban and densely populated. Regardless, that doesn’t take away from the nearby scenery.

A twisting road leads you through the woods, riding adjacent to the Nickajack Creek and eventually crossing over the flowing water. At 130 feet, it’s not the longest nor most impressive, but definitely worth visiting. What I found to be most impressive was indeed the amount of traffic this bridge saw, cars and trucks passing over nonstop, waiting their turn as it’s a one lane bridge. While enjoyable, I had my sights set on more distant lands.

The next couple of bridges on my list were south of the city. Just 60 miles below Atlanta, you’ll find the Red Oak Creek covered bridge located in the small community of Ilmac. Constructed in the 1840s, this is Georgia’s oldest covered bridge, outliving the nearly 250 covered bridges we had at one point. This bridge was built by famed architect and freed slave Horace King. Over his 77-year lifetime, King oversaw the construction of hundreds and hundreds of bridges across Alabama, Georgia and Mississippi, earning him the notoriety of being one of the most respected bridge builders of the south.

A rule I had made for myself while traveling was to avoid any and all interstates, taking backroads only. The ride south down GA Route 85 is incredibly peaceful and passes through small town after small town. I love an old historic downtown square, one with a main street adorned by pecan trees. The ride hugged parts of the Georgia railway, sometimes catching glimpses of mile long trains cutting across the state.

The Red Oak Creek bridge has the longest total span with just over 400 feet with the covered section only being 115 feet. The sight alone of a wooden covered bridge is exciting, riding through it even more so. The noise of the wood, the vibration from the uneven surface, the remoteness of their locations—it instantly transports you to another era. The design of the bridges, their beautiful lattice work, and impressive construction is a feat, especially after standing for nearly 200 years. They don’t make‘em like they used to.

Speaking of which, my 1982 Honda GoldWing Aspencade 1100 definitely proved to be the right bike choice for these expeditions. These bridges were few and far between, so 200- to 300-mile day trips were common when exploring. The open roads were plenty as the bike sailed over Georgia’s ever-changing landscape. Cruise control, a cupholder, and the stereo became heavily relied upon for the days spent on the road.

I eventually pressed on to the further reaches of Georgia, now heading southeast toward the coastal plains. Roads previously lined with forests of pine trees soon opened up to rolling prairies and farmland. GA Route 212 took me through Monticello, through Milledgeville, through Swainsboro, and eventually to George L. Smith State Park. While the main feature of this park is the Parrish Mill Pond, you will indeed find a covered bridge from the late 1800s here. The parks location is quite remote but really captures the essence of south Georgia. The covered bridge sits on the edge of the pond and overlooks the stands of cypress tress shooting out of the water. For a second you almost forget where you are, the wildlife is ever present and the surrounding nature is incredibly serene. And the nearby riding proved to be just as serene. The backroads continued to tour acres upon acres of pristine Georgia country. Roadside scenes were filled with livestock, old barns, junk cars, and not much else.

Empty roads make for an empty stomach and after riding for hours on end I’m always in search of a hearty meal. Here in Georgia we’re lucky. While there may only be a handful of covered bridges in the state, there are 438 Waffle Houses. This means odds are you aren’t too far from one at any given moment. What goes well with covered bridges? Smothered hashbrowns of course. I love Waffle House. It is my definition of comfort food and any motorcycle trip is not complete without a meal there. It has become a staple, now something I inherently associate with being on the road. I am often a solo traveler when riding, which at times can become lonely or even provide feelings of anxiety when exploring somewhere new. This is when I begin to search for things that help with a sense of familiarity and Waffle House provides just that. After a long day of riding, spotting the yellow sign and pulling over for some coffee and bacon and eggs can really put you in a good mood.

The next few bridges on my list were to take me toward the northeast corner of the state, nearing the South Carolina border. One of the more interesting bridges on this list is the Haralson Mill Covered Bridge, which was actually built in 1997, making it the most recent wooden covered bridge constructed since the 1890s. The choice for a wooden covered bridge was made due to their historical significance in Georgia, choosing to design it after similar styled bridges from the 1800s. At 150-feet long, the structure itself is gorgeous. Intricate woodwork crosses overhead as the lattice work allows for copious amounts of natural light to fill the bridge while also providing glimpses of Big Haynes Creek. I made sure to carve some time off the bike to take in some of the great hiking along the shore below.

I continued riding backroads from one town to the next, stopping every 150 miles for gas or to pee, whichever came first. Open roads, open mind is another one I like to say and nothing beats helmet time. Visiting these bridges continued to take me through the middle of nowhere without any clues as to where I was. I hadn’t a thought nor care in the world as I rode, the surrounding landscapes continued to paint themselves, changing from one to the next the more I rode on.

The rolling hills and towering trees were back as the GoldWing and I traversed through the Oconee National Forest. The smell of pine filled the air as I headed north toward the Elder Mill covered bridge which was tucked away down a dirt road and well hidden in the outer reaches of the woods. Built in 1897 and spanning 99 feet, this bridge first sat over Call Creek but was later moved in 1924 to its current location over Rose Creek. I again spent some time off the bike down by the river, listening to the quiet hum of the water over the rocks and watched birds circle overhead. Still I had no clue where I was and was glad about it.

The terrain was changing again as the rolling hills grew larger, I was continuing further north to the last bridge on my list. The Watson Mill Covered Bridge is the longest covered bridge in the state at 229-feet long. Most notably, it was built in 1885 by Washington W.W. King, the son of famed bridge builder Horace King. This was by far the most impressive and picturesque bridge I had visited. The South Fork River was wide and flowing and the surrounding nature was perfect. The rapid shoals ran down stream over rocks and trees and further into the woods. It was a cold afternoon and the water perfectly reflected the blue sky, making for a very chilly landscape.

I found myself again cruising the backroads, but this time headed back toward the city. I had “Long Train Runnin’” by The Doobie Brothers playing over the stereo and a Coca-Cola in the cupholder. Seriously, want to know the secret to happiness? It’s a vintage GoldWing. Though unsure of exactly where I was, I wasn’t surprised to be passing dozens of Waffle Houses along the way, soon starting to catch a whiff of bacon in the air.

The yellow sign was beckoning so I of course pulled in because no trip is complete without it. Wheels and waffles, a great way to tour the state. As I downed some coffee I felt successful in my mission of wandering aimlessly from covered bridge to covered bridge, getting to explore new parts of Georgia. Some say it’s not about the destination, it’s the journey. Some say the journey is the destination. And while I’m sure there’s validity to both, I realized that my destination, at least this time around, was Waffle House.