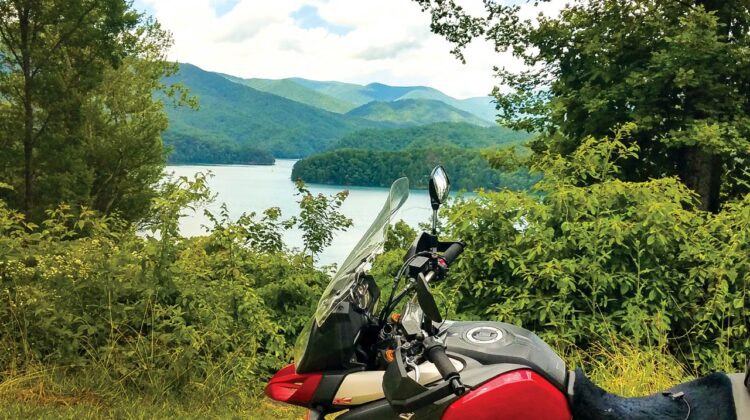 Just a few miles before the southern start of Highway 28 outside Seneca, S.C., a flotilla of graceful sailboats catches my eye out in Lake Keowee. Their seemingly delicate sails crossing the shimmering water with the Blue Ridge Mountains towering in the distance was gorgeous.

Next to this man-made lake in Upstate South Carolina, “Moonshiner 28” begins its 115-mile northeastern climb up into the mountains. Along the way it treats motorcycle travelers to azure lakes, cliffside routes lined with waterfalls, a chance to sleep in a covered wagon at the famed Iron Horse Motorcycle Lodge, and a visit to the highest hydroelectric dam on the East Coast.

As the road enters Walhalla, a weathered plaque on a stone column of the sleepy Upstate town bears the phrase “Gateway to the Blue Ridge.” This sleepy town, founded by German immigrants in the 1800s, gets its name from Norse mythology’s Valhalla, the heavenly afterlife where warriors live blissfully indulging themselves for eternity. For motorcyclists, this does seem like the gateway to a rider’s paradise.

Not far up Highway 28, just when the curves start to get entertaining, lies Stumphouse Tunnel and Issaqueena Falls. A modest fee to park gains you access to this failed feat of engineering, an unfinished railroad tunnel boring deep into the mountain. In the mid-1800s, construction began on a series of railroad tunnels designed to connect the port city of Charleston, S.C., to the Ohio River Valley. Halted by the outbreak of the Civil War, the tunnel — along with three others — was never completed. Workers tunneled for 1,617 feet of the planned total of 5,863 feet before construction halted.

Today, the tunnel is a city park. On summer days, the cold air flowing out of the man-made cave proves a pleasant break from the heat. For two decades, Clemson University used the tunnel to grow blue cheese until they built a more modern facility near campus. In the same park, hikers can access Issaqueena Falls, named for a legendary Cherokee woman who folklore says leapt to her death from the top of the 100-foot waterfall with her lover.

Highway 28 climbs from the tunnel up what the Cherokee called “The Blue Wall,” otherwise known as the Blue Ridge Escarpment. Traffic is light between Walhalla and you briefly cut the corner of Georgia as the curves alternate between gentle bends and challenging switchbacks. The road climbs more than 3,000 feet in elevation before reaching 4,117-feet in the town of Highlands, N.C., and riders will notice the chill filling the air at that altitude.

Highlands is a mountain playground for well-heeled tourists and summer residents. It’s not unusual to spot a Ferrari, Lamborghini or other exotic car rumbling along the boutique-lined main street. In the summer, the town plays host to the Highlands Motoring Festival, an annual classic car show that fills the city park with a bevy of rare and beautiful machines. Moonshiner 28 joins up with U.S. 64 on the Southern Highroads Trail, a scenic loop of four states along the base of the Blue Ridge Mountains. Heading west takes riders into the Cullasaja Gorge. Just a few miles outside of Highlands, a sharp turn reveals Bridal Veil Falls, a popular stop for photos. Once the road passed under the falls. Today, a safer route bypasses the wet and sometimes icy spot.

Dry Falls appears just a short distance away. The parking lot features restrooms and a walkway offering a great view of the cascade. A winding staircase descends into the gorge and allows visitors to “stay dry” as they pass beneath the waterfall. The road begins to cling to a shelf on the canyon walls, twisting its way down the gorge. It can be fun to ride when traffic is light, but expect buses and RVs during the tourist season. Highway 28 continues to follow the Cullasaja River down from Highlands until it joins the Little Tennessee River not far from the Nikwasi Mound, an ancient Cherokee Indian mound in the center of Franklin, N.C., and just next to Highway 28. The mound and surrounding village were a spiritual, cultural and ceremonial center for the Cherokee. Historians say the summit once featured a townhouse where the Cherokee met with British and colonial delegations in the 1700s.

A gas station across from the mound makes an excellent place to refuel and admire the archeological wonder since the road north to cross U.S. 74 features few businesses but plenty of enjoyable curves and scenic beauty. This section before joining U.S. 74 is just as thrilling as Moonshiner 28’s more popular sections, but seems less crowded and more spiritual as it follows the Little Tennessee River through Cowee, another ancestral Cherokee homeland now lost to history.

After a brief stretch of becoming a four-lane highway, Highway 28 narrows at Wolf Creek General Store and Café near Stecoah. Not far away, the Iron Horse Motorcycle Lodge makes for the perfect overnight stop while touring the area. The lodge, campground, RV park and cabin rentals recently underwent extensive renovations. Visitors who haven’t been to Iron Horse in a few years will be pleasantly surprised by all the upgrades.

“It’s a beautiful property,” said Billy Ditmore, a manager at Iron Horse Lodge. “We’ve added the covered wagons. They’re air conditioned. They are super nice, king-sized or twin beds, microwave and refrigerator. Everybody that goes in them likes it.”

The frontier-like exterior of the newly added covered wagons hides a luxurious interior with plush bedding, nightstands and other touches. They don’t have running water or bathrooms since they are still mobile, but they are only a short walk from the bathhouse. Improvements also extend to the main lodge, where more televisions and meeting space allow for group gatherings.

There are new benches by the creek. They’ve added more tables. The front porch now features an extended covered area for bikes. Iron Horse has even stocked the pond with fish if you want to cast a line after a day’s riding. Most rooms now feature satellite TV, and improvement requested by visitors for years. Iron Horse now features a gas pump on site, saving riders the trouble of hunting for a fuel station. They even have shuttle buses that can pick up groups at the airport and deliver them to their sister business, Wolf Creek Motorcycle Rentals. You can still rough it in a tent by the creek, but Iron Horse now offers a large luxury cabins including the impressive Big Bear Cabin, a seven-room house featuring hot tub, game room and private bathrooms.

A few miles away, Highway 28 passes the serene waters of the 10,000-acre Fontana Lake, where the Little Tennessee River, along with the Tuckasegee and Nantahala rivers, run into the 480-foot Fontana Dam. Constructed during World War II to supply power for east Tennessee’s ALCOA aluminum production plant, the TVA-built dam is the tallest in the Eastern United States and became operational in early 1945.

I pull into the visitor’s center, which offers an excellent view of the dam. I feel a special connection to this structure since my grandfather was one of the 5,000 workers who helped construct the dam and nearby Fontana Village. The village began as housing for the workers who built the dam but now it serves as a vacation resort.

Two access points off Highway 28 take visitors to the engineering marvel. The first turnoff runs by a boat ramp and marina up to the top of the dam where you can ride across the top of the structure. The Appalachian Trail crosses the top of the dam as it crosses into the Great Smoky Mountains National Park. The second turnoff takes you the powerhouse and spillway where if you arrive on a day when they release the water through the diversion tunnels you will be treated to a spectacular show of whitewater blasting over the small defection dam.

One of the most scenic parts of Moonshiner 28 emerges past the dam as you enjoy a peaceful ride alongside the river ultimately arriving at U.S. 129 at the Deal’s Gap Motorcycle Resort. It is here where Moonshiner 28 vanishes and the famous Dragon begins. The three-state journey from the piedmont of South Carolina to Great Smokies ends appropriately in a motorcycle-filled parking lot. If the revving engines and the fast-paced crowds of The Dragon don’t appeal to you, just turn around. Moonshiner 28 is just as fun to ride downhill.