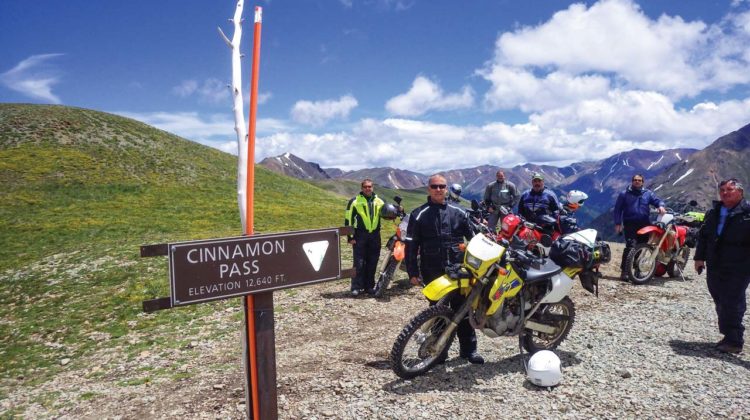 Clayton Miller sat in his truck before me, flashing his $10 smile. The kind of smile you have when you scratch off a $10 win on a $2 lottery ticket. Chris Wilcox and Clayton had made plans for a group motorcycle ride. A motorcycle ride which would take us into and over the high passes of the Colorado Rocky Mountains. Winter snowfall made many of the planned routes impassable, except in the summer months.

It’s about 1,600 miles from Boone, North Carolina, to Vail, Colorado. A trailer full of dual sport motorcycles is attached to Clayton’s pickup truck. Four Suzukis, two Hondas and two KTMs are staggered facing left and right, filling the trailer. Clayton smiled and waved. “I got to go boys” he exclaimed. “There’s a steak house in Oklahoma City I’ve been wanting to try.”

We rolled our motorcycles out of Vail, Colorado, four days later. Eight riders heading south, up in elevation, toward Red Cliff, Colorado. We rode on asphalt through Leadville, the highest incorporated town in the U.S. at 10,152 feet above sea level. Turning off the asphalt, we took dirt roads around mountains, along streams, through the Gunnison National Forest. We continued south over the spine of the Rockies. We wound our way through old mining towns named Tin Cup and Pitkin. We crossed the Cumberland Pass at 12,015 feet. Downhill we got back on asphalt and took the highway into Gunnison, Colorado.

Gunnison is known as the base camp of the Rockies. Highway 50 goes right through town. Big diesel pick-up trucks with dual straight up exhausts blow black smoke as they roll past Priuses parked in front of coffee shops. Pretty girls with nose rings and tats hang dream catchers in the shop windows. We ate supper at the Ole Miners Steak House. Buffalo, elk and antelope heads were mounted on the walls. Cowboys and cowgirls dined on steaks that were bigger than the plates they were served on. Full and tired we took the night at the local Days Inn.

Day 2: Up Into the Hills

A short way out of Gunnison we turned south onto a dirt road that crossed a barbed wire fence line. We rolled over the cattle guard which spanned the fence break. The road twisted up into the hills, onto open ranges. The “High Lonesome” Charlie Daniels sang about was all around us. No buildings, no power poles or road signs. Just waving hills of grass that ran on, into the horizon. We spread out, hundreds of yards between riders, trying to avoid the dust kicked up by the man ahead. Alpine tree lines at the base of rock faced mountains came into view. We passed grazing cattle and stopped to watch a female moose who stood chewing wet grass in a stream 50 yards off the road.

We wound through Lake City where we began our ascent up Engineers Pass, 12,800 feet above sea level. At the top of the pass were tall, piercing, blue and gray, snowcapped mountains. Looking from north to south, the mountains rise and fall for as far as your eyes can see. The wind picked up. Snow and sleet blew across us. We pulled wind breakers or rain gear over our jackets. The road down cut across the mountain side through a snow drift. The side walls of the snow drift were 10 feet tall.

We continued down our dirt road until we found asphalt that took us into Silverton Colorado. A stuffed brown bear stood on the sidewalk in Silverton. The bear greeted guests into the restaurant where we enjoyed lunch.

We left Silverton toward Ouray on Highway 550, “The Million Dollar Highway.” It probably cost million dollars for each mile of this highway. We turned onto Ophir Road, a dirt road leading up to Ophir pass at 11,789 feet above sea level. The crest of this pass is a massive pile of rip rap. Softball size granite rock. You have to gas the bike through the rock pile and hang on. Scenic views of a lifetime are just past the edge of dramatic falls. “Must turns” occur along the narrow trail down to the tree line. “Must turns?” I asked when I heard the phrase. “You must turn or you will die,” smiled Clayton.

The town of Telluride is near the bottom of this hill. Approaching Telluride’s center, you can see straight through town to Chicago Peak and Bridal Veil Falls, a tower of a waterfall, which looks like it is pouring onto Tellurides Colorado Avenue.

The trail out of Telluride would take us over Imogen, the tallest pass in the San Juan mountains of Colorado at 13,114 feet above sea level. Chris claimed that Imogen pass was a “short cut” from Telluride to Ouray. A rocky, steep and narrow short cut. It took over two hours to cross the pass. Coming off the top of one boulder, Carl Beene did a cartwheel on his 400-cc motorcycle. We, the riders from North Carolina, limped into the town of Ouray where we spent the night.

Ouray sits in a boxed canyon. Vertical red rock walls define the town perimeter. Hikers, bikers and Rv’ers fill this cool mountain town in the summer time. The Million Dollar Highway cuts through the rock walls yielding us a scenic route out of Ouray.

In the morning we turned off the highway onto a single-track dirt trail full of swoops and moguls. Rick Riddle and Brad Edwards became kids again, popping wheelies and hopping hills. Rick left the trail bouncing through the trees to get around a four-wheeler blocking his path. Dirt roads lead us through Animas Forks on our way to Cinnamon pass, which is at 12,640 feet above sea level. Up and over we returned to Lake City for gas and a late lunch. We rode the asphalt into Crested Butte to end our third day.

Crested Butte is a ski town. An awesome ski hill rises up from the town’s base.  We had a big day ahead. The supposed highlight of our trip was a single-track ride to the Devils Punchbowl. The Punchbowl is a swirling whirlpool in a river which is tucked into a narrow valley. Our last day of riding. Chris was determined to see the Punchbowl. Then ride back to Vail where we would load the bikes onto the trailer. All before driving to the airport.

We gathered at a gas station near the hotel. While waiting for everyone to group up, a friendly police officer approached us. The officer asked about our ride. Chris explained our route plans and his desire to reach the Devils Punchbowl. The officer informed us the route we planned on taking had been closed for the winter. He was not sure if it was cleared for travel yet.  Daemon Anagnos stood quietly, listening to the officer.

“Maybe we should skip this trail if it is not going to be open” Daemon proposed. Chris shook his head. “Don’t worry, the trail will be fine” he said.

Off we went. After a short ride on the highway we turned onto a dirt road that became a trail through a recreation area where campers and kayakers were gearing up for the day. Snowboarders slid across our path on a couple of long narrow snow drifts. This snow was still stubbornly holding on into July. The trail continued and passed a very large sign. The sign was bright orange with big black letters. “Trail Closed Ahead.”  “No Vehicles Beyond This Point.” We burned past the sign without slowing.

We slid down a couple of rock faces. The trail narrowed. The brush closed in around us. Our path became wet as we got closer to the river. Soon we were riding in water that was wheel hub deep. The path was made of tight turns through the brush. We rode holding our feet up, trying to keep our boots dry. The trail climbed a small rise that got us out of the water. Then, the trail before us disappeared into a swiftly running river. It reappeared on the other side of the river and ran along the mountain side. We dismounted and removed our helmets. We stood before the river assessing our situation. The single-track trail beyond continued downward, beside the river. The river fell quickly but the trail did not. A cliff from the trail to the river formed. The cliff became taller and steeper as the path continued. It looked like some rock slides might be blocking the trail.

“Who knew?” asked Chris, shrugging his shoulders and raising his hands palms up. Daemon turned towards Chris in reply “Well, there was the cop.” He answered quietly. The rest of us nodded as we stood watching the rushing water. “And that big sign” grumbled Brad, still focused on the running water. “That thing was as big as a garage door.”

The day was passing and we had miles to cover. We decided that a volunteer needed to cross the river and recon the trail to see if we could continue. Chris volunteered Charlie. Carl agreed to go with him. They successfully navigated the crossing. They disappeared down the bending trail. We stood quietly waiting, but not for long. Soon we saw the two bikes returning.

Carl crossed first, followed by Charlie who hit a snag in the middle and went down. Several of us waded into the river to get Charlie and his motorcycle. Brad and Rick immediately went to work on Charlies bike trying to get the water out of the air box. Charlie was a little damp but unhurt. Carl described a rockslide, beyond the bend in the trail as impassable. “We’re not going that way” asserted Carl, pointing at the trail before us.

Brad fired up Charlie’s bike. We turned around. We rode back, through the water, up the rock faces and past our sign. Turning on to the highway we returned to the station where we had met the police officer. Chris was a little dejected having missed the Devils Punchbowl. “We will be back” he promised as he pressed the starter on his KTM. He pointed his bike north, and we rode the highway, returning to Vail.

Writer Tom Enterline’s first motorcycle was a used 1974 Norton 850 Commando, mettalic blue with silver trim. He was 19 years old at the time, and the bike blew up once, was repaired, and eventually transported Tom the 550 miles from his father’s farm in Dover, Delaware, to Boone. That was 42 years ago. Tom — now a building contractor, carpenter, husband and father — still lives near Boone, just a quarter-mile from the Blue Ridge Parkway. Today he has a Suzuki DRZ 400, a KTM 500 EXC, and a BMW 1200 GS adventure bike.  “I am blessed  in that  I live, work and ride in the Southern Appalachians,” he says. enterlinetomt@gmail.com