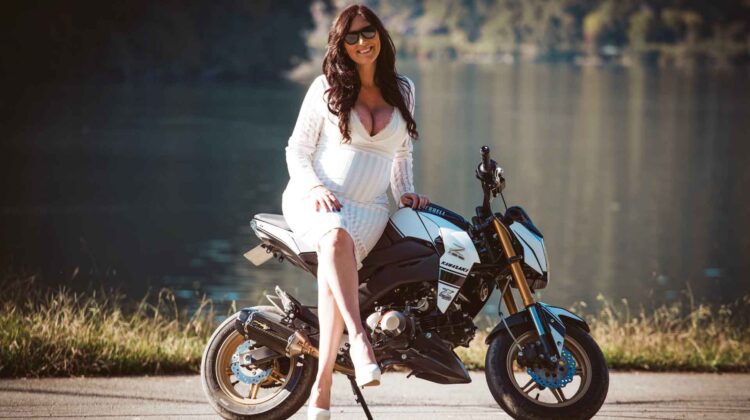 Some women always know they’ll be a mom one day. That wasn’t me.

My husband and I relished our independence and financial freedom: the ability to fly across the country for riding adventures whenever we desired, attend track days at a moment’s notice, or even just enjoy date nights on a whim. Our lives felt fulfilled. I was happy with just the two of us as a family, but then in March something changed.

We headed to the cart track at the Herrin Compound to ride minibikes with friends. This wasn’t the first time, but this time was different: There were a ton of kids in attendance. Let me put this in perspective here. I have never been a “kid person.” By that I mean I would rather not hold people’s babies, I don’t like sticky fingers on my furniture, and if I had the choice, I would ban children from breweries so we can all enjoy our beer.

But my experience at the Herrin Compound wasn’t like that. I loved watching the kids. I was mesmerized by their sheer joy and excitement around riding. Toward the end of the day, my husband and I took a break and stood by the fence just watching the kids out there on their bikes. And for the first time in my life I thought, “What if there’s something missing in my life.”

That feeling at the Herrin Compound stayed with me. Yet, I tried to shake it. As a woman in her late 30s, I felt parenthood had passed me by, so I moved on. At least so I thought. In mid-May, I began to notice some odd symptoms and finally made the leap to buying a pregnancy test. As I waited for the result, I did something I’ve never done before. I prayed that it would be positive. I had never in my life prayed for a baby, but in that instant I did. And sure enough, it was positive.

I hadn’t planned for this or expected it, so I wasn’t sure how to tell my husband, Jud — or whether I should see a doctor before telling him. I didn’t have time to decide though. Jud immediately knew something was up. So instead of coming up with some cute way to break the news, I blurted it out. Poor guy. I wasn’t sure how he would take it, but ever since that day he’s been amazing.

The funny thing about the pregnancy is that even though I’ve never been certain that I wanted to be a parent, the moment I saw the positive test I knew without a shadow of a doubt that I desperately wanted that baby. Not any baby. But the specific baby inside me. And the entire experience has felt supernatural. I don’t mean just the prayer I said while waiting on the result, but I soon learned the baby’s due date could very well be on the anniversary of my brother-in-law, John, passing away earlier this year. And knowing that God takes away, but also gives, combined with the recent epiphany at the Herrin Compound, it’s 100% supernatural.

It’s important to know this backstory as I talk about my journey riding while pregnant because it plays into my approach. Although I’m going to share my experience riding with a baby on board, what I learned, and some helpful tips for other women who find themselves in my shoes, it’s critical to keep in mind that each woman’s pregnancy story — and their feelings around it — are different.

To ride or not to ride

There is no right or wrong choice. Screw what other people tell you. Riding while pregnant is a decision only YOU and your partner can make. I will say this. There is no getting around the fact that it’s risky — the question you have to ask yourself is whether or not you’re willing to take that risk. My OB-GYN told me not to ride due to the fall risk and the likelihood it could lead to a miscarriage. So, at first, my plan was not to ride at all throughout pregnancy, but I realized that I desperately missed it and it was making me depressed. I was still so early in my pregnancy and quitting riding cold turkey was just too big of a change too soon. I also figured we’re faced with many risks in life and can’t remain in a bubble, so I decided to continue riding but to take certain precautions.

If there are women who shared their pregnancy journey on two wheels, I certainly never saw it. I was going in completely blind. I had no idea what to expect, what was safe or not safe, or what to be prepared for. Here’s what I discovered:

Pregnancy is freaking exhausting. I’m past the halfway point and still haven’t gotten that second-trimester energy boost everyone talks about. The first thing I learned is that I couldn’t ride as long or as often as I used to. A couple of laps on The Dragon and I was toast. A day-long ride was nearly out of the question. If you have the energy to do it, great — ride your heart out! But if you don’t, don’t be hard on yourself. You’re building a human.

Staying hydrated is critical in maintaining a healthy level of amniotic fluid for the baby. Although I dislike having a tank bag or backpack, I made sure I always had plenty of water and would guzzle it down between riding breaks. Or better yet, wear a hydration pack.

During the first trimester, maintaining a core body temperature over 101 degrees for a prolonged period can lead to neural tube defects. It’s important to stay cool and not get overheated. Even later in pregnancy, it’s not safe since pregnant women can be easily overheated and suffer from heat exhaustion or heat stroke that can be detrimental to you or the pregnancy. This is tough when it’s warm out. I still rode during the summer but tried to choose cooler areas in the mountains and would also not ride when it was especially hot. Sometimes I would get hot, but when I did, I would take a break, hydrate and try to cool down.

Although it’s a misconception that you’re truly eating for two (during pregnancy, you only need about a 300 calorie-per-day increase), it’s still important not to let yourself get too hungry. For me, I found that if I didn’t eat about every 2 or 3 hours, I would feel nauseated. Keeping protein bars or peanut butter crackers in my backpack or tank bag while riding was very helpful.

5. Know where the bathrooms are

I didn’t know this at first, but it’s not so much the pressure of the growing baby that makes you have to pee all the time, but the hormones. Thus, even the first trimester you’ll have to pee A LOT. Just let your riding buddies know you may need some frequent stops and it’s also helpful to plan out where bathrooms may be.

I didn’t know at first whether it was OK or not to go over bumps while pregnant, so I tried to dodge them as much as possible and if I did go over a bump, I kind of freaked out and worried I hurt the baby. According to my OB-GYN, going over small bumps is perfectly fine. The baby is protected by the amniotic fluid. During the first trimester and early in the second, your baby is very small and thus more protected. That being said, you shouldn’t be going full send over speed bumps or larger bumps, but those minor bumps in the road are OK. In the same sense, the vibrations of the bike are also safe.

I also worried about whether it’s OK to aggressively get on the throttle or brakes or to do quick transitions in tight corners. Look at it this way, you’re not supposed to ride a rollercoaster while pregnant. Why? Because the jarring motion can separate the placenta from the uterus and the placenta is the baby’s lifeline. Rapid/aggressive acceleration or deceleration or abrupt transitions leaning on and off the bike are similar. That’s what the research says, but I rode The Dragon, a very twisty, curvy road, at a moderate pace while pregnant and my placenta remained perfectly healthy. I did try to make my transitions in terms of speed and lean angle as smooth as possible and not abrupt.

8. At some point, your gear or bike might not fit

Around the 20-week mark was when I realized I couldn’t fit on my Yamaha R6. Well, I could, but not without putting pressure on my baby bump. And when I tried to sit up enough to do so, I couldn’t reach the clip-ons. Also, gear becomes tricky the larger your tummy gets.

I assumed my pregnancy and motherhood wouldn’t be well-accepted or supported in the motorcycling community. I think I made that assumption because I see so few women motorcyclists share their pregnancy journeys, babies, or even the fact that they’re moms, on social media. There are some women I follow on social media who I would never even know were moms without having learned about it on a personal level. This led me to perhaps think the industry isn’t supportive, but I’ve had a different experience than what I thought. The community and industry have been surprisingly supportive.

I first began revealing I was pregnant at the Sportbike Track Time Ladies Day the end of May. I was registered for the track day but decided not to ride — mostly because I was so nauseated at that time. I still went to support all the women and enjoy their company. The staff at Sportbike Track Time were very kind and congratulatory as were all the participants. I also had some of my sponsors there and it gave me the opportunity to tell them. As I shared the news with different sponsors, instead of them being irritated I might not fulfill their expectations, they were enthusiastic and still wanted to support me. They understood this would merely be a break and I would be right back at it once the baby arrived. I’ve also found that motorcycle community members, who would I think wouldn’t care about the pregnancy, have been encouraging and genuinely interested to know how it’s going.

Also, by publicly sharing my pregnancy journey via social media, I’ve had so many motorcycle moms reach out to me to offer their support, encouragement and tips. I’ve greatly appreciated it.

I cannot stress enough that just like the choice to ride or not ride while pregnant, the choice to share your journey — or your motherhood — is also personal. I deeply respect and can understand some women want to keep their personal life away from the public eye. Just because I’ve had a positive experience with pregnancy and the motorcycling community doesn’t mean that everyone has. There may be women who do feel judged. Also, not everyone has an easy pregnancy. Some women have complications and risks that prevent them from wanting to publicly share it. And there’s absolutely nothing wrong with that.

I still have a long way to go. As I write this post, I’m 22 weeks pregnant. That means 18 more weeks!

My dream is that a few years from now my husband and I will be back at the Herrin Compound, standing at the fence, watching. But instead of watching other people’s children, it will be our child out there playing on his or her motorcycle.