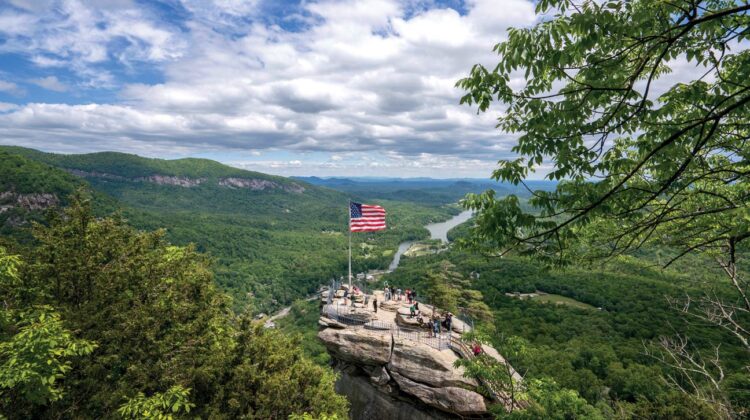 Seeing the out-of-state license plate in front of me, I quickly decide to drop a gear and overtake the dawdling SUV in the long straight on U.S. 74A. It will be my last chance for several miles as the old highway crosses a flat farmland valley before climbing up to the Eastern Continental Divide.

My Royal Enfield Continental GT 650 howls its twin-cylinder barbaric yawp as I wait until my nerve runs out before backing off for the chicane that heralds the start of a series of switchbacks up to the Hickory Nut Gap. This section of U.S. 74A runs from Asheville, North Carolina, down to the popular motorcycling destination of Chimney Rock and Lake Lure.

Eight 180-degree switchbacks test my cornering skills. With no traffic ahead of me, I’m able to squeeze a quicker pace out of the café racer, not letting up until I reach the summit of the pass where I encounter parked cars, left by hikers, lining the roadside.

From here, the waters flow east to the coast. The temperature rises as I move into the southern exposure of the mountain range. I spot a couple of fellow motorcyclists after dispatching a few of the less-technical downhill curves and speed up to follow them. They’re probably heading to the same place, the small mountain village next to one of the region’s most unique rock formations. The riders ahead set a good pace, so I don’t crowd them and we flow down the Hickory Nut Gorge. It’s an 1,800-feet drop down the Blue Ridge Escarpment to the lake below.

The namesake of this gorge, the hickory nut, can be seen littering the road in summer and fall. The golf-ball sized nuts get crushed into a slick paste by passing cars, so I’m always mindful to watch for them.

Soon I find myself next to the Rocky Broad River after N.C. 9 and U.S. 64 join up with U.S. 74A. I can’t resist stopping to admire the boulder fields trying to hinder the river’s incessant journey down the mountain. Frost heaves have split a large rock outcrop, big as a house, in two as cleanly as if sliced with a giant knife.  It’s the curious geology of this area that formed the monolith a few miles away.

Several restaurants and souvenir shops nestle next to the entrance of Chimney Rock State Park. A scenic, winding road takes visitors up to the towering rock spire set amid a sylvan wilderness awaiting exploration. I reflect on all the fond memories of this place when as a youth I eagerly attended the annual SCCA hillclimb where sports cars once raced up the access road. For 50 years ending in 1995, the park attracted drivers and their exotic racing machines to determine who would be the fastest up the narrow, twisting road. Now, the only howl of an engine is the one coming from between my calves as I head to the top.

“The views take your breath away. There’s truly not a bad view to be found no matter where you are in the park,” said Emily Walker, the general manager of Chimney Rock State Park. “Chimney Rock is such a unique place for many reasons. Obviously, the views are out of this world, but also there’s such a great story here.”

For centuries, wanderers traveled by horseback and carriage to enjoy this hidden gorge where the Blue Ridge makes its final stand. Near the upper parking lot is an elevator carved in 1949 and set 198 feet back into the rockface to meet a 258-foot vertical shaft. A short ride takes you to a gift shop on the same level as the monolith. The long tunnel to the elevator doors feels cool and refreshing on a hot summer day and makes reaching Chimney Rock much easier especially when wearing motorcycle boots. Well maintained trails and staircases make the sights easy to access. Hickory Nut Falls, one of the tallest waterfalls in the country at 404 feet in height. On the lower end of the falls, a boardwalk allows you to feel the spray running down the smooth, dark rockface amid the trees.

“People come for a variety of reasons,” Walker said. “It may be to see the views, take a hike, have a picnic or something more specific such as guided rock climbing. We like to think that they’re coming to disconnect from the hectic world we live in, to reconnect with themselves and those they’re with.”

It’s easy to disconnect in this scenic gorge. Standing next to my bike gazing out at the blue-gray lake on the horizon, fills me with a rejuvenating sense of wonder that only motorcycle travels seem to bring. With a rumble, I head back down to U.S. 64/74A.

“Not many parks are found nestled in a quaint village with so much to do right outside the gates,” Walker said. I pull into Burntshirt Vineyard’s Tasting Room and Bistro across from the park’s entrance. Their outdoor patio offers a great view of the rock and a chance to grab lunch, relax and enjoy watching the other bikes rumble through town.

I could spend all afternoon here, but I take my leave of the tasting-room crowd and head south to a spot favored by motorcyclists, the Tiki Bar at the Geneva Motel. As expected, I find a crowd of fellow riders at the pool side bar and eatery. Classic rock fills the air, and I walk the parking lot admiring the other bikes and talking with some fellow riders, many of whom rode up from the Piedmont to enjoy a day in the Blue Ridge Mountains.

Last fall, I rode down to the Tiki Bar with fellow Royal Enfield enthusiast Jon Young, 66, a recording engineer who once worked with the Pat Metheny Group.

“This is kind of my back yard,” he said. “We live atop Bearwallow Mountain. This whole area is one of my favorite loops.”

Young returned to riding after a 26-year absence after he and his wife moved from Nashville, Tennessee, to a mountaintop community just miles from the Hickory Nut Gorge.

“The roads are just ideal for motorcycles. I thought I was done with biking when I moved to Tennessee 26 years ago,” Young said. “I kind of got the itch to go for a bike again. I knew all I wanted to do was to have one for joy riding and day trips.”

Young recently purchased a 2020 Royal Enfield INT 650. I thought I was the only Royal Enfield rider in my area, until we met in an online group for the Indian marque and realized we lived in the same county.

“This is the ideal place and the Enfield is the ideal bike for doing that. I didn’t want a lot of bells and whistles. I didn’t want something that looked like an insect from outer space. I just love the retro look to the Enfield. It looks like the kind of bike I grew up riding but with modern amenities of antilock brakes and fuel injection.”

From the Tiki Bar, I follow the river down to where it joins Lake Lure just beyond the Flowering Bridge. The town has converted the obsolete U.S. 64/74A bridge into a pedestrian walkway filled with a huge variety of plants and flowers. Just beyond, the town’s manicured beach awaits the crowds of summer but seems lightly populated today. The lyrics from an old Don Henley song fill my head. “Nobody on the road. Nobody on the beach.”

As if by habit, I pull over next to the historic Lake Lure Inn and sit beneath a sycamore tree in the parking lot, a spot I’ve visited countless times before to enjoy it’s shade and stare out at the rocky cliffs in the distance on the far side of the lake. I take my usual seat on the roots of the old tree and listen to the ticking of the hot exhaust pipes cooling. Across the lake, the sun hits the rocky cliffs in the distance. For a moment, I feel just as eternal.