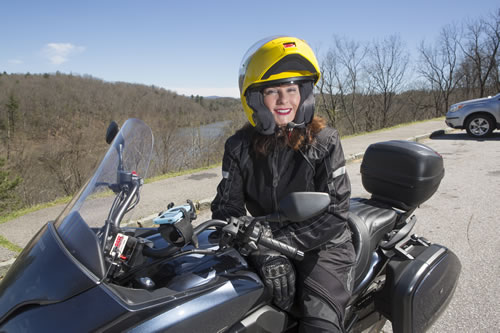 Susan Dunlap probably couldn’t have a more buttoned down job.

As the director of communications, she heads up a bustling department of professionals at the region’s largest medical center, Mission Hospital. It’s a serious job in a high-intensity industry where professionalism is demanded and expected.

And she’s a motorcycle mama. Well, a Princely version of one.

Dunlap joined Mission about two years ago, and she’s been riding a motorcycle about a year and a half – a Honda CTX700, like the one Prince famously rode in the movie “Purple Rain,” although Dunlap’s is midnight blue, not purple.

“The first time I rode my bike to work, they came over to the window and I could see their faces pressed to the glass,” Dunlap said. “I just sort of sauntered in, in all my gear and holding my helmet, and I said, ‘If you can’t be cool, you just need to go home.’”

It got a huge laugh. One of her employees, Nancy Lindell, remembers the day vividly.

“’Nice leathers’ – that’s what I said to her,” Lindell said with a laugh. “Never in a million years would I have thought she rode a motorcycle.”

Lindell was used to seeing her boss in dress pants, blouses and sparkly jewelry, but Lindell can tell Dunlap likes to stay fun.

“She stays cutting edge,” Lindell said. “She likes to surprise you.”

Dunlap is always open to adventure, and even after the death of her husband four years ago from cancer, Dunlap has kept a positive attitude and taste for adventure. It’s clear that she loves her life, and that bike.

“I’ve only been riding a motorcycle just over one year now,” said Dunlap, 58, chatting in a downtown coffee shop. “It is the same kind Prince rode in ‘Purple Rain.’”

She has to laugh, and it’s the kind that shows she doesn’t take herself too seriously outside of the professional world – and that she can laugh even after deep losses. Dunlap lost her husband, Tavner Dunlap, four years ago to lymphoma.

He was a fascinating guy, an equine attorney and thoroughbred horse blood stock agent. A discovery during one of the most mundane of daily activities would change the course of both their lives.

“He was shaving and looking in the mirror, and he saw a lump on his neck,” Dunlap said. “He felt fine, but we thought he better get it checked out. And 19 months later, with three treatments and a clinical trial, he was gone.”

It was a second marriage for both, lasting five years. Tavner left his wife a big BMW sedan, a 700 series, a favorite of his.

It was old and prone to breakdowns, though, and Dunlap decided to sell, with the idea of getting a BMW motorcycle to honor her late husband’s memory. They were a bit too tall, though, and felt too weighty.

Dunlap had taken the Motorcycle Rider Safety Course, and safety was paramount to her. So she started out with a Vespa scooter.

It was a less intimidating bike, but at 300 cc’s, it was no weed whacker on wheels.

“It had a lot of power,” Dunlap said. “I would take it out on the interstate and these guys on Harleys would come up to me and just gawk. It would hit 100 mph, and I did it, just to make sure what they told me was true. Yes, I did break the law.”

The vibration was a bit intense, though, and Dunlap allows that she didn’t keep it at full throttle for long.

Dunlap grew up in central Indiana, riding a bicycle but never anything motorized.

“I know part of it is ‘acting out,’” Dunlap said of buying a motorcycle. “When you lose somebody like that, it’s not unusual for somebody to do something that no one else would have predicted. I think that was my thing, where it was coming from.”

After the Vespa, Dunlap felt she needed a little more power to get up the big mountains around here, and that’s when she bought the Honda. It can be and automatic or manual shift, which Dunlap finds perfect for our hilly terrain. Now, the bike just seems like a perfect fit.

Riding is not something Dunlap envisioned for herself, though. Always up for a challenge, and studious, Dunlap has an undergraduate degree in English from Indiana University, a master’s in communications from Seton Hall, and she completed a fair amount of her doctoral degree in public health at Kentucky but withdrew when her husband got sick.

Career-wise, she started out working in community news, then transitioned to the corporate world, holding several positions in communications with health care companies. Before coming to Asheville, Dunlap was working for a health care cooperative in Louisville, Kentucky, but it lost its funding and she found herself looking for work.

She and Tavner had vacationed annually in Asheville, staying at the Grove Park Inn, and they had even talked about retiring here. So when the Mission job came open, Dunlap jumped on the opportunity and landed the position.

The area was familiar to her, and that was soothing. But still, she knew no one.

“It almost felt like delayed trauma to be in a city where you don’t know a soul,” Dunlap said. “I didn’t have my kids with me. Didn’t know a soul.”

Her three grown daughters live in Lexington and Louisville.

Working at mission helped her meet people, and she joined Leadership Asheville, which educates folks about the local area and institutions. That helped break the ice, as did motorcycling.

Dunlap likes riding with others, and she’s joined Asphalt Sisters and the local Gold Wing group. Last summer, she rode a lot with a new friend, Keith Kimble, an Asheville area Harley rider.

“She’s actually a better rider than me – very safe,” Kimble said. “I feel safer with her than some of the guys I ride with.”

Kimble says Dunlap is always an organized person, utilizes a lot of gear and researches rides beforehand. But she does have that wild streak.

He tells a story on her about one Sunday when they were going to ride, but Dunlap insisted they go to church first.

Kimble had all his riding gear on, but Dunlap walked into church in her Sunday best, carrying a helmet. After the service, the priest blessed their helmets for safety.
As with most enthusiasts, Kimble says riding is just good therapy – the wind, the sun, the level of concentration.

Dunlap agrees, although she notes that any direction you head out for a ride from Asheville, you’re going to hit serious curves and elevation changes. So you better bring your A game.

Some of the roads are “like a Hot Wheels track,” Dunlap says, and with the steepness and curves you know you can’t turn back. That requires intense focus.

“Anything else going on in your life – your kids, your work, your taxes, whatever – you can’t think about it,” Dunlap said. “You have to think about how you’re going to get through that ride. It might sound strange to people, but it’s very liberating to not have any of that other stuff on your mind for that amount of time.”

While Dunlap doesn’t consider herself edgy, she does allow that she likes to push the envelope.

“Whenever I’ve been challenged to do truth or dare, I’ve always taken the dare,” Dunlap said with a hearty laugh. “I can’t even tell my parents to this day what some of those dares involved, but I’ve always been a bit of a daredevil.”

One of those dares dates back to a time in high school when Dunlap was staying in a fifth story dorm room at a school in Paris, France. In need of postage stamps to send postcards back home, she ventured out on a ledge and scooted over to the room next door.

I was just confident I could do it if I stayed “by the wall and inched my way over,” Dunlap said. “I definitely have a history of doing some crazy stuff.”

Lindell knows well that Dunlap is far from reckless, though. She sees her boss more as a woman who wants to live life to the fullest, especially after the loss of her husband.

“She is a very resilient person,” Lindell said. “She’s a very fun-loving person who’s full of life. She’s not going to curl up and retreat. I expect her to live life twice as much on his behalf.”

Dunlap says you simply have no choice in life, because “it’s not like you can just not get up in the morning.” So she plans to stay in the mountains, which feel like home now, and keep on riding that Prince motorcycle.

She’s yet to catch any grief about it, by the way.