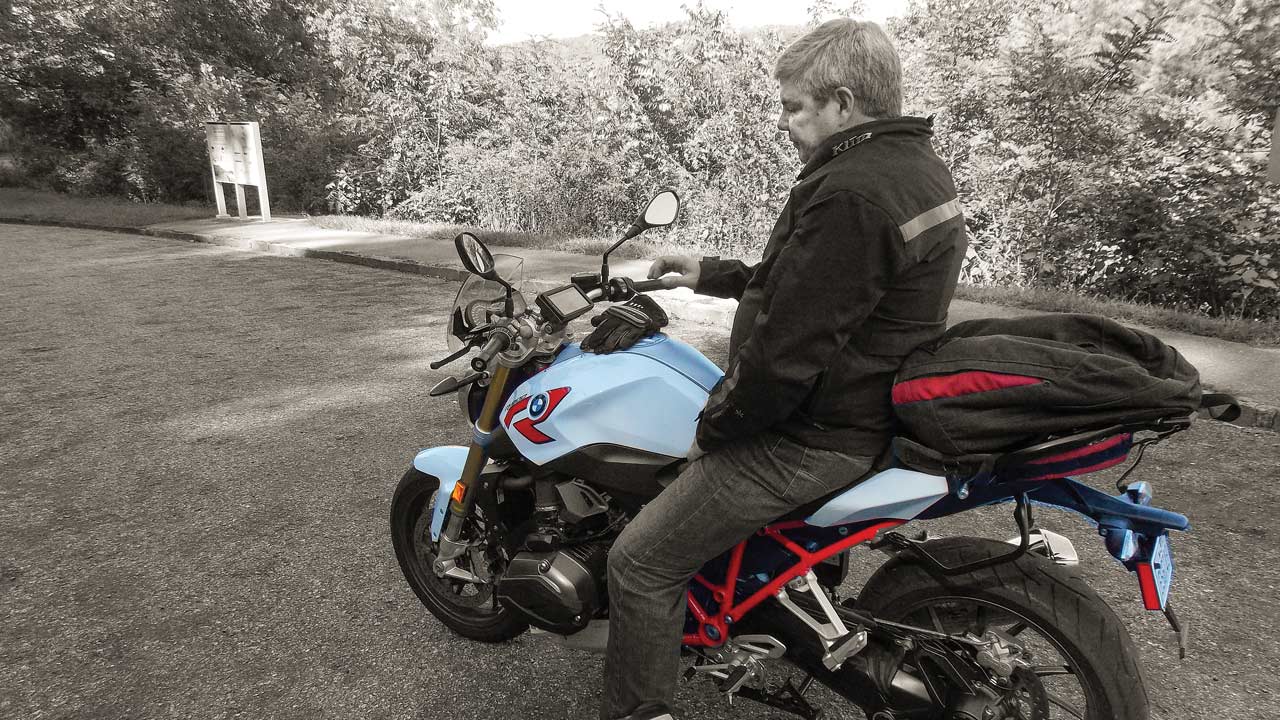 The bright red tank decals and matching subframe on Diamond Brand Gear CEO John Delaloye’s 2016 BMW R 1220 seem to transfix the eyes of passersby as he prepares to head out for an afternoon ride. The elegant design of the naked Beemer played a major role in bringing Delaloye back to the world of motorcycling.

“It connects really well to our business in the sense that I love the design. That’s the thing that gets me the most excited about motorcycles is their design. How they’re built. How they’re put together. I can see the engine and have more of a connection to the machine,” Delaloye said. “I think with a car, we lose that connection.”

The svelte white-and-red BMW instantly drew Delaloye’s attention, not for the performance potential of what it can do, but the German craftsmanship of its design.

“I get more excited about what it is, how it was made, the history and progression of how it got to this point,” Delaloye said. Since taking the R 1200 home, he started to fill his shelves with books on the Motorrad’s history.

Diamond Brand has designed outdoor tents and other equipment for much of the 20th century, starting with a backpack for the Boy Scouts in 1931 and tents for the American military during both world wars and every conflict since. Delaloye runs the manufacturing side, Diamond Brand Gear, which split from the retail business, Diamond Brand Outdoors, in 2015.

“We’re an American maker of camping and military gear. Tents and shelters are our primary products. We also do covers for helicopters and helicopter equipment for a company based in New Hampshire. We’re also moving into the ‘glamping’ market.”

Their upscale family tents and other aftermarket products are largely manufactured in the Asheville area. Delaloye sees Diamond Brand’s products as a way to encourage people to go camping and take away those hurdles to getting outside.

“Our big mission is we know it’s healthy for people to get outside and do something,” he said. “Some brands get a little finicky about people going out on a motorcycle or dirt bike. Is that real camping? In my opinion, that’s getting outside and doing something physical versus being inside. That’s the alternative: screens and computers, stationary stuff where you don’t exert much effort.”

Diamond Brand used to make some motorcycle equipment when Delaloye first started in 2005. “We make some tire warmers and a helmet case, but we haven’t done that in a while. I liked to, under our brand, make a couple of specific things. I don’t think we’ll have a broad range of products, but have a few specialty products. If we can’t do it very well, and someone else does it a lot better, we’ll stay away. We want a good product that performs like it should.”

Delaloye says he was one those kids that had a homemade dirt bike at age 5 or 6, built by his father and grandfather, eventually moving up to a Honda XR 75 he would race through the fields near his childhood Missouri home. Seeking cheap transportation during his college years at Northwestern University, Delaloye purchased a Yamaha Riva 125 scooter to zip around the college town of Evanston, Illinois.

“I rode it everywhere. It had enough horsepower I could take two people,” he said. “I made one commitment to myself I would try to ride down to Chicago on Lakeshore Drive. That was the first and last time I’m ever going to do that. I made it. I made it back and retired from going town-to-town.”

As with many riders, the demands of life, career and family halted his two-wheeled life. The new job at Diamond Brand and a move to Asheville rekindled his desire to hop back on a bike and explore the mountains.

“I wanted to get comfortable, get back on a bike and get to know the area and the people. I took a pretty good, long break. That scooter retired probably when I was 25, so that’s 27 years ago,” he said. “I’ve been focused more on work. I bought this motorcycle to get comfortable riding again, and being fairly cautious. I took the safety class at Blue Ridge (Community College) and had a great experience with those guys.”

When the weather cooperates, Delaloye commutes to his office on his BMW, taking the scenic route and enjoying that point of one’s life when taking time to savor the journey becomes a bit more important. He eschews radios, headsets and other interruptions in favor of a few minutes alone with his thoughts and the open road, even if he knows it sometimes worries his wife, Susan.

“It’s a struggle for me to get my wife on the back. She’s not that interested. My kids are anxious about getting hurt, so they won’t get on the back. It’s just me,” he said. “She’s a great supporter and knows that I would like it, and it’s a great part of being in this part of the country that I just love.”

Susan Delaloye says her husband’s interest in motorcycles goes back to before she first met him decades ago. Despite the dangers, she supports his return to motorcycling.

“I appreciate that John takes motorcycle safety seriously because it was a concern for me when he first started looking at motorcycles,” she said. “For John, riding a motorcycle relieves stress. It takes his full concentration and is more active than driving a car. When you spend a lot of time getting from place to place, why not have fun getting there?”

Delaloye looked at Harleys. He considered buying an Indian Scout. Getting back into riding after nearly three decades convinced him to look for something not too big. He wanted to feel the wind and not be too sheltered by large fairings.

“I didn’t want something that was going to put me completely behind something. For me, getting back out there, getting close to the machine, is a lot of fun. I love every aspect of it,” he said. “I love — even in my commute which is 20 minutes to-and-from work — I get to look around, get outside of a car. I get to see so many more things. I’ve been doing the same commute for 12 years, and now I notice new things. I like that.”

One discovery he made about his new hobby, the depth of the comradery among his fellow riders and how friendly the motorcycle community can be.

“I didn’t know before I started riding on the road that folks gave a little wave or nod to other riders,” he said. “It’s just a nice thing that other folks don’t really do. I was very encouraged by that.”