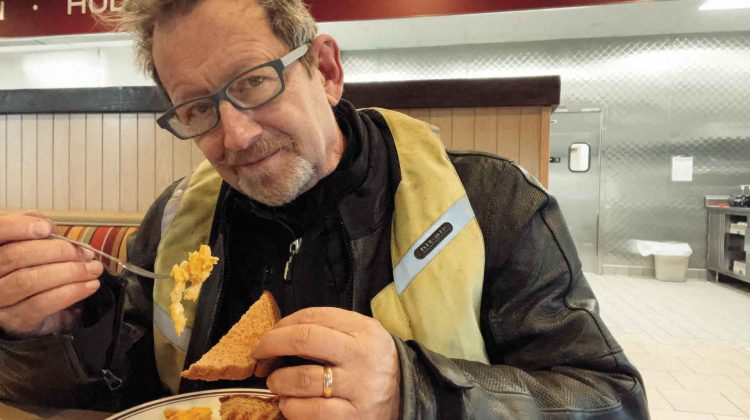 We make these determinations in milliseconds. We don’t ponder the nature of pavement, but I do — or, at least that’s what I’m doing as I stand on the southbound lane of Interstate 81. In the rain. Surrounded by massive 18-wheelers. For four hours.

Most of my mototravels seek out the places I could go by car, but don’t. I wander roads promising beauty and history and vistas and exhilaration.

Sweepers north in the Shenandoah Valley on Route 42 in the footsteps of generals McDowell and McClellan and Jackson and Hunter and Breckinridge and Sheridan.

Innumerable thunder roads that wind through moonshine hills in Virginia and West Virginia and Kentucky and Tennessee and North Carolina.

Why put myself through this?

Like many of us, I fell in love with Melissa Holbrook Pierson’s first book, “The Perfect Vehicle: What It Is About Motorcycles” and Moto Guzzis along the way.

In 2011, her “The Man Who Would Stop at Nothing; Long-distance Motorcycling’s Endless Road” introduced me to the world of long-distance motorcycling and the Iron Butt Association. She also told the incredible story of John Ryan — the laconic über-tall rider whose passions for long-distance riding outpaced all others around him.

I loved that book. I met Pierson and Ryan for the first time at a book signing at Morton’s BMW in Fredericksburg and again two years later at the IMS in New York. The idea of doing Iron Butt rides entered my world. In 2016, I did my own Saddlesore 1000: a thousand miles in under 24 hours. I finished in under 19 hours, even after I’d taken a 45-minute nap in Marietta, Georgia.

Not too difficult, really. Kind of boring, in fact.

This year, of all the rides I could be doing in order to get to Jacksonville and the IBA’s annual party, I decided on the Eggsanity 1000 Gold. The simple yet challenging rules are:

Seems easy enough, right? With only eight Royal Waffle Kings and three Omelet Shoppes still open, routing becomes critical. How do you plan a route that incorporates all four brands within the time-and-distance challenge? And still have the stomach for it all?

I also took the IBA’s recommendation to pause caffeine intake for 10 days or more before the ride. Shifting to decaf coffee and avoiding Diet Cokes helped.

On a Wednesday at 3:30 a.m., the alarm wakes me from six hours of fitful sleep.

“I’m not ready for this,” I think. Having packed the bike the night before, all I have to do is pull on my gear: a good base layer, heated First Gear jacket and gloves, and Aerostich Transit 3 “waterproof” pants and jacket. Ear plugs and my Schuberth E1 helmet with Cardo 4+ unit complete the gear.

At a nearby Waffle House in Richmond, I step out of the rain into the bright restaurant. Not even pulling my gear off, I raise my Schuberth chin piece and order a single scrambled egg and a piece of wheat toast. Got to pace myself. I snap my first picture of me eating eggs. I immediately pay for my bill — because the clock STARTS when you get that first receipt — not when you walk into the restaurant.

The ride begins at 4:20 a.m. I struggle to take an odometer photo because receipt paper doesn’t like raindrops, yet I succeeded in getting a readable shot.

Re-suited, I’m off to the next stop, the Omelet Shoppe in Dublin, Virginia. All is well, even though it’s pitch dark and raining. But the heated gear is doing its job, the road is free of much traffic, so I head west on Interstate 64 toward Afton Mountain. Rain spatters on my windshield and my face shield and my Aerostich. But with no appreciable wind, it’s not so bad riding this way. Riding in the dark and the rain elevates some stress yet also comfortably blankets me.

As I-64 rises out of the Piedmont and ascends into the Blue Ridge Mountains, the rain begins to turn brighter in my headlights. The 18-wheelers around me begin to slow appreciably. Then I realize it’s no longer rain but sleet pelting me. As the straight interstate gives way to sweepers and curves — still in the dark — the prospect of navigating curves over Afton Mountain in the dark and the freezing rain tightens my … let’s call it “muscles.” I curve past U.S. 250 and the two parkways, Skyline and the Blue Ridge, then descend into the valley and connect with I-81 south.

I’d seen a sign that construction ahead meant merging traffic, but this seems somehow different. And it is, so my bike idles, hissing off stinking steam.

As dawn lightens, the rain slackens. Now I shut the bike off, realizing that there’s something not right about the scene. Then sirens begin to come into my hearing range. Emergency vehicles race south on the shoulder. Some time later, some return northbound, piercing wails and slashing lights telling a story I later find out from another person wandering the tarmac. A major wreck just ahead of where I stand traps us. Nothing to do but look at marbled iridescence of pavement in the slackening rain.

I’d calculated that I had about four hours of leeway, four hours to account for traffic or detours or even rest stops. I begin to have that sinking feeling that two hours into my challenge, I might not finish.

Just after the four-hour mark, a state trooper walks southbound, splitting lanes as he tells motorists to turn around in their lanes. Traffic is routed northbound on the shoulder. The CDL drivers must wait things out. You need 40 acres to turn those rigs around.

I join the parade to detour around the delay.

Once back on I-81, I enjoy smooth riding. The rain stops, the mist rolls away as Roanoke and Blacksburg blur by. Sun fights with clouds but promises better weather. Rolling up the valley, I even enjoy vistas of the mountains on my left.

I follow the GPS to Dublin, where I pull into the truck stop that houses the Omelet Shoppe. Again, I leave my helmet on but at least pull gloves off. Another scrambled egg and toast at the counter, another selfie with eggs, and another receipt to photograph with my odometer, and I’m off again.

Now it’s no longer Virginia but Tennessee roads underneath me as I pass through the home of country music. South of Bristol I easily finish I-81 and join I-40 west. On through Strawberry Plains and around Knoxville. Meeting up with I-75 south, I head ever-closer to my old stomping grounds in southeast Tennessee.

At Cleveland, I leave 75 to slip around to my third destination. The Huddle House is rocking at 7 p.m. I should have been here for a late lunch, now I’m having a dinner meal of two scrambled eggs and some toast.

As the sunset hits my eyes when I turn out of the parking lot, I thank the motogods for the drying of the pavement. Moving south on Route 60, I cross into Georgia and navigate through Dalton to hook up again with I-75 south. More ghosts of my past as I skim the edges of greater Chattanooga. No time to argue with them. Atlanta awaits.

Gladly I’m in and through Atlanta at the tail end of one of the most notorious rush hour traffic spaghettis in North America. Yet it’s now dark again. I heighten my attention as south suburb-bound Atlantans speed their SUVs to East Point and College Park and Jonesboro and McDonough.

Breaking out of that pack, I take an easterly left at Macon, pausing to tell Siri to play the Gregg Allman Live ‘72 album as a nod to Capricorn Records and the birth of Southern Rock. Picking up I-16 East toward Savannah, I suddenly see few SUVs or Freightliners.

Just after 11 p.m., I hit Swainsboro for the Royal Waffle King. It’s a desolate place, but the yellow-and-black colors beckon. A short stop for gas in Statesboro reminds me of Blind Willie McTell and his legacy of “Statesboro Blues,” made famous through the Allman Brothers Band riffing off Taj Mahal’s version and making it their own.

But no time for musical tourism, especially as midnight looms. Weather radar shows that I’ll run into rain before I connect with I-95 south just west of Savannah.

The radar is right.

As Wednesday turns into Thursday and the clock shows me only four or so hours left, I hit driving rain and increased traffic. At times trucks spew sheets of spray as we pass each other. My Aerostich has thoroughly failed me. I know I’m drenched from waist to knees. My Schuberth’s face shield drips almost as much water inside as out.

Finally I hit the Florida line. I’m still within my time window, but I mis-navigate construction at I-295; instead of heading west, I somehow end up easterly. I navigate bumpy lanes and confusing construction barriers to get turned around.

Now heading to West Jacksonville, I ponder Lynyrd Skynyrd starting out from there. “Tuesday’s Gone,” indeed.

I follow my GPS, watching miles and time count down. I pull off on the Normandy Boulevard exit, thinking of the history that name connotes. It’s how my brain works.

A few meters away and I pull into the Waffle House parking lot. I come in, water dripping everywhere off my gear onto their floor. I order.

“Could I have a pecan waffle, scrambled eggs, and bacon. Oh, and toast,” I croak, my voice hoarse from not taking for so long. “Oh, and could I go ahead and pay?”

I take the receipt as I pay. I look.

Now to cross the St. John’s River, check into the Ramada Inn that serves as the IBA Daytona Bike Week Event Headquarters — and sleep the sleep of an Iron Butt rider.