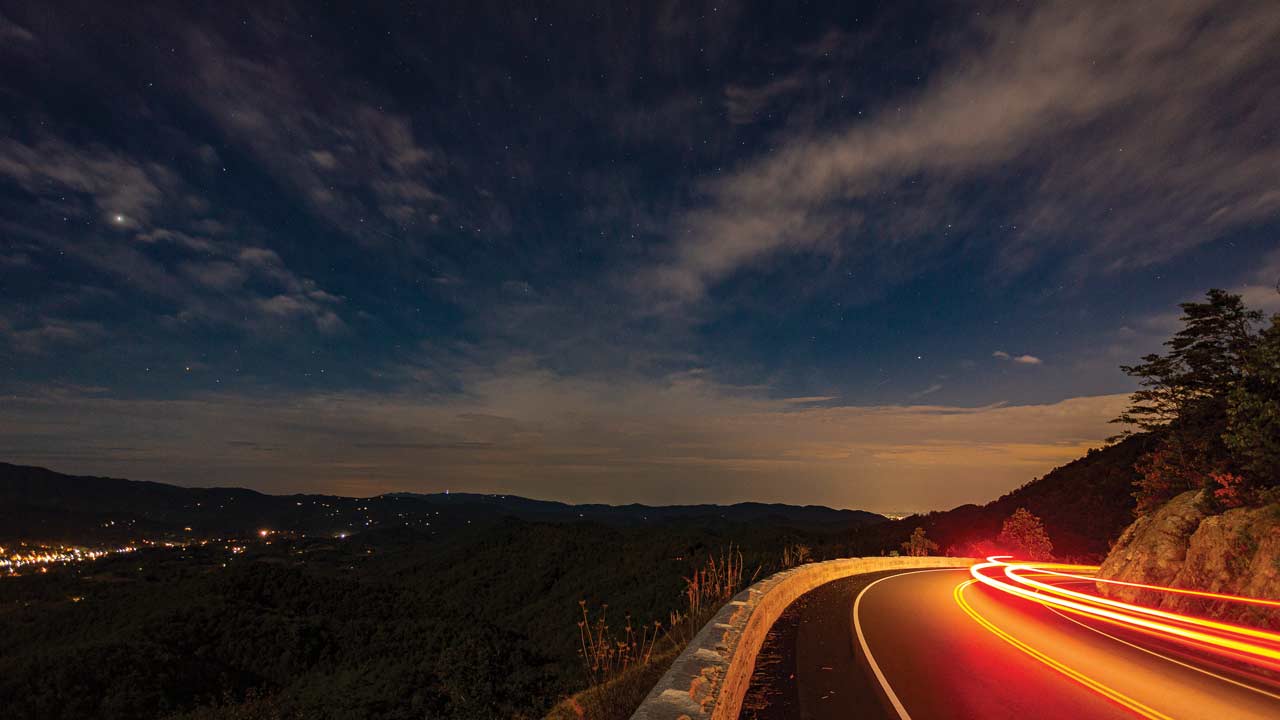 Riding close to the outside railing made my stomach suddenly flutter with a fear of heights as I crossed the eight new viaduct bridges on the newest section of the Foothills Parkway. A glance to the south revealed open space and a ridgeline across the valley as the ground suddenly disappeared only to return and disappear again.

Eastern Tennessee’s unfinished dream of a scenic parkway west of the Smokies gained 16 more miles last year when a “missing link” section opened connecting Wears Valley to the existing western section, which runs down to Chilhowee and the end of the Dragon on U.S. 219.

Hearing of a new scenic road I’ve yet to travel, I plotted a clockwise loop from Chilhowee up to the new section and back down the Little River Gorge in the Tennessee portion of the Great Smoky Mountains National Park. This would give me an uphill run along the Foothills Parkway and afford my lane of travel the best long-distance views of the Smokies.

The western terminus of the parkway offered a bit of relief after crossing Deals Gap and the crowded 11 miles of the Tail of the Dragon. The tension in my shoulders eased up now, and I no longer had to focus my attention on the fast-moving sports cars and corner-carvers — not to mention negotiating the road’s 318 turns.  I slowed my pace and stopped at one of the many overlooks to rest and listen to the wind in the trees for a little while instead of my rumbling V-twin. Unlike its more famous sibling — The Blue Ridge Parkway — traffic here seems lighter with fewer out-of-state license tags on display.

When Congress authorized the building of the Blue Ridge Parkway in the 1930s, Tennessee got shut out of the deal. The scenic road, which began in Virginia’s Shenandoah Valley, would end in Cherokee, North Carolina. Thus began the effort to build the Foothills Parkway along the western edge of the Smokies, with initial congressional approval in 1944 but followed by years of delays. The first section near Chilhowee opened in 1966, but other sections in the middle of the planned route still remain uncompleted. A look at Google Maps shows a tantalizing green path where the already-purchased right-of-way for the missing sections runs all the way to Cosby, but there exists no road through that wilderness.

Soon I arrive at Look Rock near the highest point of the parkway’s western section. I stroll out to the rock next to the parking lot and gaze into the rolling hills beyond. An observation tower on the ridge above, accessible with a half-mile hike, gives an even better 360-degree panoramic view. I’d linger longer, but I know the new section I’ve yet to explore lies a few miles ahead.

The road once ended at U.S. 321 near Wallend. The exit for the highway now seems a bit too big since the traffic seems to prefer to continue across the parkway. U.S. 321 makes a U-shaped route through this area, and the new link of the parkway takes a short cut to again meet 321 in Wears Valley. I smile as I spot the new tarmac and begin to climb back into the mountains.

In North Carolina, the final piece of the Blue Ridge Parkway opened in 1987 when the Linn Cove Viaduct crossed the environmentally sensitive area surrounding Grandfather Mountain. The same issue confronted the Foothills Parkway builders. Instead of one graceful viaduct, this section of the Foothills Parkway features eight, some with sharper curves and more-inspiring views.

Exiting the parkway, I ventured onward to explore the Little River Gorge in the adjacent national forest. Along the river, a group of motorcyclists gathered to take in the scenery.

“We came from Robbinsville to the bottom of the Foothills Parkway to ride the new part. It was impressive with the way the bridges curved to follow the mountain,” said Tim Robertson of Kalamazoo, Michigan. His 2006 Kawasaki ZZR 600 seemed the perfect bike for taming the mountain road along the river bank.

“It’s old school, but it works — passenger backrest for the wife so I don’t lose her,” he said. His Michigan license plate drew an inquiry about his travels from the Wolverine State.

“It’s flat there, don’t come,” he joked as he confessed his group trailered their bikes most of the way.

Robertson and his fellow riders were making the same loop as I only in the opposite direction. The mountains of east Tennessee served as their vacation destination, a chance to ride some of the country’s best roads with their close friends and explore the new section of the Foothills Parkway.

“You can’t get any prettier or more beautiful or more peaceful riding than that stretch of road. The way it curves, the pavement is nice and smooth and you can see for miles. The countryside is beautiful,” he said. “It’s curvy, I like how it switches back and forth, yet it’s only 30-40 mph.”

As Robertson and his group planned their next destination, a small waterfall nearby continued to attract sightseers. Meigs Falls on a tributary of the Little River can be glimpsed upstream from the road. The large pull-off accommodates several vehicles and makes for a welcome stop if you get caught behind slow-moving traffic.

Following the river upstream, the road leads to the Townsend Wye, an intersection near a swimming hole. Turn left on Laurel Creek Road will take you to picturesque Cades Cove. Today, I chose to turn right and head for Townsend. The road widens as it runs alongside some campgrounds filled with visitors to the Smokies. The park attracts 11 million visitors a year, the most of any U.S. national park.

On a hill just off the road, I spot an old wooden wagon and some log cabins next to a modern, concave-shaped visitor’s center. It looks inviting as a final rest stop before I begin to turn the bike toward home again. As I dismount, I discover this welcoming spot is the Great Smoky Mountains Heritage Center, a nonprofit museum dedicated to the pioneer settlers, Native American tribes and prehistoric inhabitants of the Great Smoky Mountain region.

“When they started widening the road, they started finding artifacts in the road bed,” said Andy Simon, director and curator of the Great Smoky Mountains Heritage Center in Townsend, Tennessee. “People knew the Cherokee have always lived here, but people did not know that early American man lived here at least 10,000 years ago.”

The museum started with the help of a gentleman who collected 19th-century wagons, Simon said. It morphed into a museum to preserve the history of the area with some help from the state of Tennessee and the University of Tennessee.

“We go from early American man, to the pioneers and into the late-1800s, early-1900s. We have 14 outbuildings all filled with period antiques. We’re also a hands-on teaching museum,” Simon said.

“We’re more than just a museum,” Simon added. “We’re also an event center. We have a 500-seat amphitheater. We do concerts. We do a lecture series.”

I scan the posters advertising upcoming events, including a model train exhibit opening this holiday season that sparks a small bit of childhood excitement in me. The friendly staff offer me directions to Pigeon Forge, just 16 miles away. I head off in that direction reflecting on the fact early man walked this same trail 10,000 years before me.