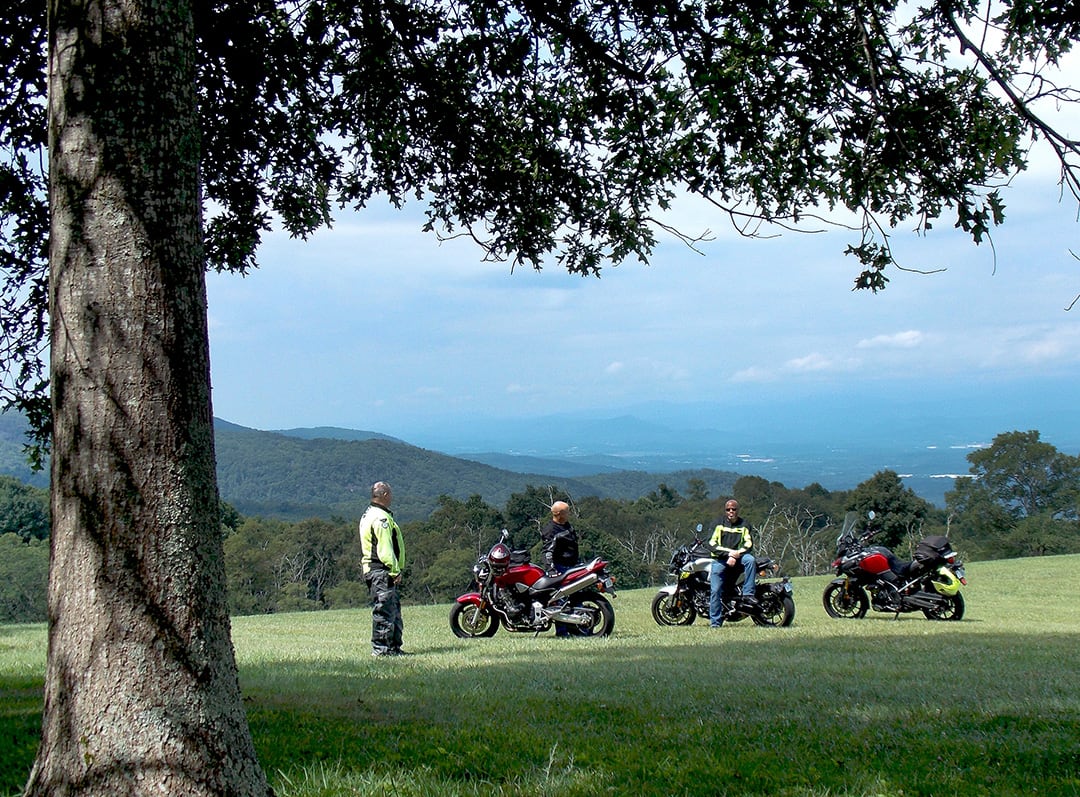 I felt a burst of cool air pass through my mesh jacket as I rode to meet my riding companions for the day. Summer’s heat was fading, and my favorite season for motorcycling would soon arrive. I remembered an ironic line from F. Scott Fitzgerald: “Life starts all over again when it gets crisp in the fall.”

While autumn didn’t bring much happiness to the characters in “The Great Gatsby,” for many devoted motorcycle riders, the changing season delivers stunning colors and milder temperatures, which only add to the enjoyment of experiencing a life on two wheels. I arrive at the rendezvous spot early and scan the horizon, giving a scornful gaze at the darkening clouds to the northwest. Soon, I heard the purring of a pair of Japanese naked bikes approaching as my friends Harvey Conner and Victor Johnson roll up.

It fell to me, the lover of lonely roads, to decide our course for the day’s outing. The sky toward Henderson County south of Asheville, N.C., looked more inviting, and it dawned on me to head over among the apple orchards and climb the twisties up to Bearwallow Mountain. The fruit would be hanging heavy on the trees as harvest season commences, and the roads crisscrossing Edneyville provide a wonderful day of unimpeded cruising.

The peak harvest of North Carolina apples occurs between mid-August and October, according to the North Carolina Apple Growers Association. The state ranks seventh in apple production in the United States, with Henderson County producing nearly 65 percent of the state’s harvest. Each Labor Day weekend, the nearby city of Hendersonville hosts its annual Apple Festival, a four-day street fair celebrating the fruit grown in these hills since the 1700s.

From the appropriately named Fruitland community, our trio of bikes roll along Old Clear Creek Road into the orchards. There are more than 200 apple growers in these parts, according to the growers’ association. Amid pastures with grazing longhorn cattle and quiet creeks flowing along the valley, we gracefully lean, one after the other, into the gentle curves of this enticing countryside. Rounding a curve, we’re greeted by two giant fiberglass cows perched at the edge of the pasture by the intersection of Rhodes Road. Being a fan of kitschy roadside Americana, I grab a handful of brakes and pull over. Puncheon Camp Creek Ranch features a replica old timey town with full-sized replicas including a hotel, post office, jail, courthouse, fire department, bank, and general store. Built by Boyd “Bub” Hyder, simply because he wanted one, the private ranch sometimes holds public events for charity, giving visitors a rare chance to explore the faux town.

Towering in the distance above the bullet-ridden cow statues rises Bearwallow Mountain. This 4,232-foot peak in the northeast corner of Henderson County is among the most prominent on the horizon, easily seen from downtown Hendersonville. We head to Bearwallow Mountain Road and begin the serpentine ascent up the hill until we arrive at Grand Highlands, an upscale housing development built on the site of an old grass airstrip on a hilltop adjacent to Bearwallow. Here, along the Eastern Continental Divide, we stop to gaze off into the distance. The vista offers an expansive view of Henderson County and much of south Buncombe to the northwest.

Motorized traffic isn’t allowed on the gravel road to the summit of Bearwallow, where hikers are rewarded with 360-degree panoramic views. The grassy, rock-strewn summit features an old fire tower and telecommunications aerials set next to a peaceful cow pasture accessible by two trails. Nearly 500 acres around the mountaintop are protected from development by the Carolina Mountain Land Conservancy, largely due to the generous donation of several hundred acres by the Lyda family.

A gravel road heads east from the ridgetop and makes for a fun dual-sport/adventure bike ride down to U.S. 74A in Gerton. My street bike friends demur, so we backtrack down to the orchards on Old Clear Creek Road and resume our ride to explore another historical curiosity located near the base of the mountain. A small, brown sign denotes the way up Wash Freeman Road where a solitary grave marker sits just inches from the roadway. It’s the grave of an unknown Confederate soldier killed in the final year of the Civil War.

A two-page letter posted on a sign next to the soldier’s resting place tells the story of mountain boy separated from his unit and camping with three other suspected deserters along Laurel Creek when the home guard approached. The men scattered and the home guard fired, killing one of the men. They buried him along the trailside. Who he was and the exact date of his death are lost to history. He may have been a deserter or merely on leave to help with the family farm. Historians say such permitted absences were common. The local Sons of Confederate Veterans erected a headstone with the simple engraving of “Unknown Soldier, Infantry, CSA, 1865.”

Returning to our ride, we hit Slick Rock Road over the ridge and ride down to join U.S. 64 as it makes it way down into the Hickory Nut Gorge to join U.S. 74A in Bat Cave. Heavy rains caused several landslides in the gorge during the spring, as evidenced by the barren embankments along the highway. U.S. 74A sees heavy tourist traffic through the scenic gorge, which passes next to Chimney Rock and Lake Lure to the south. We patiently make our way back up to the Eastern Continental Divide and the Buncombe County line. Now on the opposite side of the mountain range, we travel back along the Cane Creek valley from Fairview to Fletcher, the mountain curves giving way to long, straight sections paralleling the ridgeline and tempting us with higher speeds.

In Fletcher, we head to Surf N Brew Oyster Bar for lunch. The restaurant, conveniently located on U.S. 25 and St. Johns Road, offers a selection of 24 mainstream and craft beers to pair with their fresh seafood. The family friendly chain also has locations in Johnson City and Kingsport, Tennessee. Sitting at the bar, enjoying a cold beer and steamed shrimp by the pound, we relax a bit after our enjoyable ride through apple country. The peaceful orchards and inspiring views ensure we’ll soon make another run up Bearwallow Mountain.