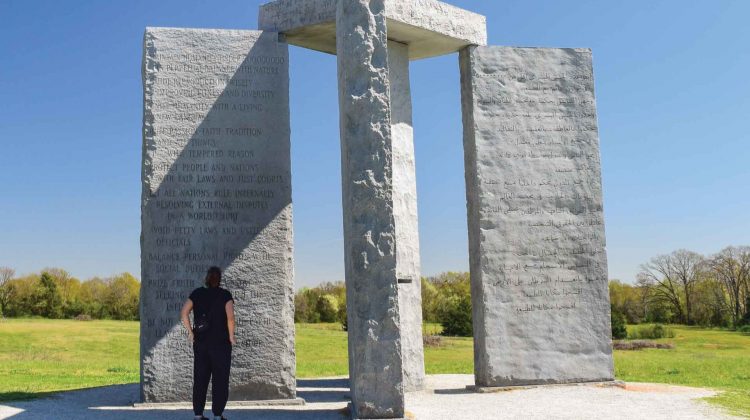 Know that riding buddy who loves conspiracy theories? Maybe you are that person. If mysteries intrigue you, then follow the backroads south to northeastern Georgia where a strange granite monument sits eerily in a lonely pasture.

This controversial assemblage of inscribed slabs sprang from the mind of a mysterious figure who called himself R.C. Christian, a pseudonym. In 1979, he wandered into Elberton, Georgia, known locally as “the granite capital of the world,” and commissioned stoneworkers to carve and erect a structure inscribed with messages in eight languages meant to be “guidestones to an age of reason.”

For riders, just getting to the guidestones offers a chance to enjoy the trifecta of Blue Ridge motorcycling: mountains, rivers and lakes. The site lies 10 miles southwest of the Lake Hartwell dam, making it easily reached for a summer day trip. About any route down from the Blue Ridge Mountains to the guidestones features wonderful curves, historic places and charming small towns.

Visiting the Georgia Guidestones can be a strange experience. The 10 messages carved repeatedly in different languages on the granite slabs leave one to ponder their connotations. Some find them full of common sense. Some see them as part of a New World Order conspiracy. Some see the messages as benign, others as ominous. Security cameras monitor the site, which now belongs to Elbert County, since vandalism is not uncommon. Groups sometime gather to hold hands and pray. Tourists stop to marvel at the strange arrangement of stones. Motorcyclists pause there simply because it makes an interesting spot to tell fellow riders about.

· Rule passion — faith — tradition — and all things with tempered reason.

· Protect people and nations with fair laws and just courts.

The identity of who created the guidestones fuels many of the conspiracy theories. Some say the Illuminati, or the Rosicrucians, the Masons, the Satanists, or other secretive groups were behind the construction of the guidestones. Only a local banker entrusted to oversee the project knew the real identity of mastermind behind the monument.

One of the more compelling theories about his identity was put forth in the 2015 documentary “Dark Clouds Over Elberton.” The filmmakers found a paper trail leading to a retired doctor in Fort Dodge, Iowa, who matched the physical description of “R.C. Christian” and who shared similar views to those espoused on the guidestones. The few people who knew his real identity back in 1979 are either dead or remain faithful to keeping the secret.

Finished in 1980 as the Cold War still raged, many think the monument’s purpose is to survive the downfall of our modern civilization and help guide the survivors in rebuilding society. The guidestones also feature boreholes and alignments to mark the North Star, equinoxes and solstices — perhaps allowing mankind to recreate a calendar if disaster wipes out such knowledge.

The granite columns already seem otherworldly as they tower over the grassy pastureland along Route 77 in Elbert County. It’s not hard to imagine these stones lasting for millennia, much like Stonehenge or the Pyramids at Giza.

Best routes to get there

A favorite route for those journeying to see the guidestones begins near Rosman, North Carolina, where U.S. 178 begins. Heading south, the highway offers some very technical curves as it drops off the Blue Ridge Escarpment. On weekends, expect to see several fellow motorcyclists enjoying the route. Stop in the Holly Springs Country Store on the corner of U.S. 178 and S.C. 11, a popular gathering place for riders exploring the base of the Blue Ridge Mountains.

Not far away on U.S. 178 toward Pickens, Hagood Mill Historic Site makes a great place to take a break and check out the old mill complete with working waterwheel and the South Carolina Petroglyph Site, which preserves significant Native American rock carvings. The mill also hosts live music and special events, making it a worthy riding destination by itself.

In addition to the historic buildings and petroglyphs, the Hagood Mill Historic Site covers 50 acres and features a pavilion for musical and other performances, a campground with a luxury bathhouse and special educational programs for both kids and adults.

Farther west, N.C. 281 drops south from U.S. 64 near Lake Toxaway. This route becomes S.C. 130 at the state line and takes riders past picturesque Whitewater Falls, Bad Creek Reservoir and onward to Lake Keowee. Traffic is usually light and the road a good mix of flowing turns that are less demanding than those on U.S. 178 to the east.

A network of backroads across this corner of South Carolina allows riders to explore the interconnected lakes of Jocassee, Keowee and Hartwell. The college town of Clemson sits on the northern end of Lake Hartwell. Further south, several boat ramps and marinas make for good photo opportunities to document your travels.

U.S. 29 crosses next to the dam where the Savannah River emerges from Lake Hartwell. The highway connects Anderson, South Carolina, to Hartwell, Georgia, with several parks and recreational areas along the lakeshore.

Whatever the route you choose, you can count on your trip to the Georgia Guidestones to spark a few conspiracy theory discussions among your riding companions.