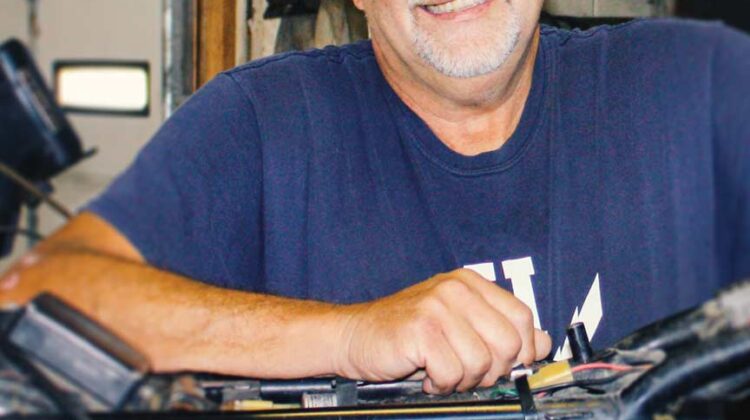 “That gleaming grey Honda CBX, the inline six cylinder model from 1981 basically transformed the latter half of my life,” claimed John Garasimowicz, owner of Okinawa Joe’s Vintage Motorcycle Sales, pointing to the bike in the featured location in the showroom of his motorcycle restoration company in Harrisonburg, Virginia.

The company is housed in an old downtown building, in that industrial and college town (It’s home to James Madison University) in the storied Shenandoah River Valley. It was built for a car dealership back in the 1940s, but its most recent use was an auto parts store. “It was in an historically depressed part of town,” Garasimowicz explained, allowing him to get a good deal on the lease. With lots of window space, passers-by on North Main or Washington Streets get a good view of the shiny machines.

Okinawa Joe’s began operation in May 2019.

“It was scary,” he admitted. “Lots of expense and paperwork to get started. Then I didn’t sell my first motorcycle until November. Now I’m selling bikes regularly, holding stock that is ready to ride and other bikes awaiting my restoration. I planned to have eight to ten ready at any time.

“I look at the market and see what people want. I look for low-hanging fruit, desirable bikes I could get for a decent price, put some love and attention into them, and then sell them at a profit.”

Garasimowicz has a knack for quickly evaluating used bikes, what desirability they have, what he’ll need to invest in them, and what they’ll sell for. “Now I don’t even go looking any more; bikes find me.

“I was a car guy from 4 years old. My father had an automobile service manual from the 1940 that I would read as soon as I learned to read. I’ve always had oil in my blood. I became the neighborhood fix-it guy. I built go carts. I loved envisioning something in my head and then building it.

“As an adult, I was always picking up old cars and motorcycles and redoing them. I raised three sons and they’re all good mechanics, too.

“In 1972, I bought my first bike and became obsessed with motorcycles. In America, people throw away everything. I got lots of bikes that were in great condition for nearly nothing because the owner didn’t want to fix them. In grade school, when most kids were listening to their teacher, I was looking out the window envisioning the work on the go-cart I was going to do that day.”

A big guy with a barrel chest, booming voice, one eye askew, and a Michael Jordan haircut, Garasimowicz had a Catholic school upbringing in Connecticut. His family DNA was mostly Eastern European and many of his male elders had mechanical skills. “I was always making mechanical things from scratch, and making broken things work. Dad was pushing me to be an engineer, but I didn’t have the math skills. It’s my Achilles tendon. I knew I would struggle with advanced algebra and calculus. So I took mechanical shop class. And I gravitated towards Industrial Arts, now called Technology Education.”

His move to Virginia was almost at a whim. Visiting Virginia and West Virginia to attend CBX rallies, he and his ex-wife loved the area. So on a vacation trip, they did some looking around and serendipitously both found teaching jobs.

“Connecticut was expensive and there were communities and development all around us. Here in Virginia, cities are islands, surrounded by forests and farms. There were no teaching jobs in West Virginia. She and I got teaching job offers in Waynesboro. That’s how this all started. We had come down on vacation and as it turned out, we stayed; we only went home to sell the house. Everything clicked, the stars aligned for us, we found a house we loved, and moved down.”

Years later he retired from teaching and Okinawa Joe’s was born.

“I’m a clairsentient. I get an intuitive feel for things, for places. I feel them, whether they’re right. I’m a natural empath. I feel people’s feelings. And I feel a machine’s energy. I feel how a motorcycle wants to run, to feel alive. I can tell when a motorcycle was loved and when it was abused. It’s not just by the appearance. It’s by the feel. And I attract others to me that can feel it. I see bikes that I feel need me to make them whole again.”

His eyes shifted back to the stunning CBX which he’d bought back in the ‘90s for $3,000 and knew was worth over $10,000 now. Bikes had appreciated in value over the decades, especially those rare and exotic, as people, mostly men with disposable income, looked to reconnect with the dream machines of their youth. Some guys had sold bikes and regretted it. Some had lusted for bikes they couldn’t afford. Now they were coming back.

The CBX epitomized the trend. Built for only four years, it was a technological tour de force, with its six in-line cylinders, double overhead cams, 24 tiny valves, and its waterfall cascade of six chrome header pipes spilling forward and underneath. The engine was air-cooled without a radiator to block the presentation, with decorative edge-polished cooling fins, unobstructed by any frame down-tubes. Honda engineered it with six carburetors, not directly in-line behind the engine but on a dihedral to narrow the space between the rider’s knees. It is a complex engine, not because anything is unusual, but just by the numbers.

Garasimowicz sold one recently to an enthusiast who told him every time he rides it, it brings tears of joy to his eyes. “It is a wonderfully refined motorcycle for its age,” he said. “Its comfort. Its smoothness. The handling is decent.” Earlier models in 1979 and 1980 were naked bikes, but the 1981 and 1982 had integral saddlebags and fairing. “It is a satisfying ride and it gets attention wherever it goes.”

“I look for bikes that appeal to me. I’m a speed junkie. I look for large displacement bikes from the late 1970s, which was the golden age of Japanese motorcycle performance development, the power wars. Prior to that were the single overhead cam engines and the two-stroke street bikes. Then came the dual overhead cam in-line four-cylinder engines, what we now think of as the Universal Japanese Motorcycle, and the race was on. Kawasaki’s KZ1000 was a bad boy. Then Honda and Yamaha and Suzuki came out with competitive models. Everybody was after more speed. They are still fast and powerful by today’s standards.

“I love the eclectic and different. Honda has always been bold with new engine designs. Of course they made their name in parallel twins and inline fours. But they also released V-twins and V-fours, both transverse and longitudinal, and the opposed flat four and later the flat six in the Gold Wing. I’ve never met a Honda I didn’t like.

“The most vexing issues on old bikes are typically fuel and spark: carburetion and points ignition. I know how to work with these now and I’m good at it but not perfect. There’s always more to learn. Ethanol in the gas has been a problem. Plastic parts are more porous. Parts deteriorate over time.”

A tour of the showroom reveals rows of polished chrome and new paint. Okinawa Joe’s has a great relationship with a superb local painter. There are two more rows of non-functional, un-restored bikes sitting in the showroom.

“I keep them there on purpose in case a customer comes in and sees one and says, ‘That’s the bike I’ve always wanted,’ and I’ll work up a number on what it would cost to restore it,” he said.

The showroom is an odd shaped room, with his office in the corner. There is a big, accordion door that is wide enough to bring a car in and out to the angled ramp into the workshop, a level above.

“A really good day is when everything falls together where my machines aren’t fighting me in the shop. This business draws really cool people, folks who are just as enthusiastic as I am. I’ve sold bikes to people over the phone, sight unseen. I’m perfectly content to work all day on my own, immersed in a bank of carbs or an ignition system, lost in the process. But the people aspect is what I love the most. When people tell me I’ve got the nicest looking XJ650 they’ve seen in the whole country, I love being able to tell them its story. I’ve had people drive in from Akron, Ohio to see a bike. It’s a great, great feeling to make someone’s dream come true.”

Garasimowicz’s hand rested on a beautiful, tomato red Honda VF750S Sabre and he said, “I had a sailor from Norfolk who always wanted a Kawasaki police bike because he watched ‘CHiPs’ as a little kid. I had one, put him on it and sent him for a ride. He came back inside with the biggest shit-eatin’ grin on his face. That makes it worthwhile.

“For me, this business is a marriage of loving people and loving motorcycles. I have time for everybody, every admirer. Sometimes there are unexpected people who walk in the door, just curious. If they walk inside, even if I know they’re not shopping or can’t afford a bike, I’ll visit with them. I love how the universe connects people. It puts people in the right place at the right time, sometimes making things possible that seem impossible.

“What I’ve discovered about my growing success here is: it’s my dedication to making the best product I can within the retail value of the bike. In many cases, it’s conversing with a customer a month before the sale. I build a rapport, a relationship, they figure me out. I’m making new friends with every bike I sell. I just finished a (Kawasaki) KZ 1000, and had it sold before it was advertised. That bike broke my balls with leaky carbs. I told the interested customer, ‘I won’t release it for sale till it’s right.’ He patiently waited until I was happy with it. He’s driving up from Florida to get it this weekend.

“If a customer wants to hear a bike run, I’ll start it up. There’s a distinct, unmistakable odor that permeates the place and takes people to another time. Old gasoline. New gasoline. Hydrocarbon fumes. When I go into new bike dealerships, I tell the guys that their place smells like plastic while my place smells like machinery. When I come in from the outside, I smell it. Once I’m here, it fades away.

“I had a lady come in recently to pick up her bike. She said she couldn’t do the paperwork in my office because of the fumes. I said to her, ‘Fumes to some, perfume to me.’”