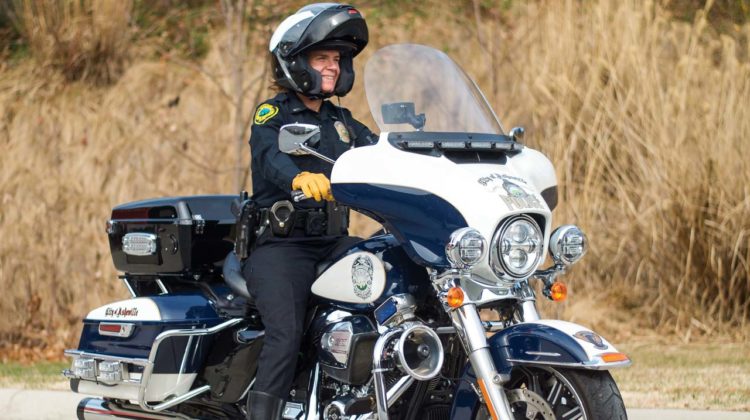 Senior Officer Meg Donahue fastens her 20-pound belt, stocked with her gun in a holster, a baton, and other trimmings around her small frame after pulling her light brown hair into a messy bun so it’ll fit into her helmet. Her uniform, which only comes in men’s sizes, bunches near her knees before being neatly tucked into her black leather boots, a small reminder of her groundbreaking presence in a male-dominated field.

She readies her motorcycle and gets on, willing the bike to move with precision and a touch of grace before chuckling at the camera. She hates pictures.

“I still don’t like the attention or being recognized,” she said on the bright winter afternoon.

Donahue gained recognition in and around Asheville when she became one of three women to complete the rigorous North Carolina State Highway Patrol Basic Motor Officer School in August, granting her the title of first female motor officer for the Asheville Police Department.

“The guys I work with pretty much had me terrified to go, telling me it’s the hardest course they ever attended in their law enforcement career. We had another guy on our team who did not pass his first go around, so I was very, very nervous to go and be able to do it and complete it because I knew how hard it would be,” Donahue said. “Then when I got there, I quickly found out just how hard it is and completely agree with them.”

In addition to the mental stress of learning a skill she’d briefly tried and then put aside due to safety concerns earlier in her career, Donahue endured the physical demands of the BMW bike used during the course which was significantly different than the Harleys at the APD, according to Donahue.

“That is probably the most physically demanding thing I’ve had to do in the police department in my 15 years. So much of it is just maneuvering the motorcycle. You know, they’re heavy, they’re large. The first couple of days I must’ve laid the bike down, can’t even count how many times, and most of the time it was on top of me. My legs were swollen, my shins were completely bruised and battered,” she recalled.

Her strength to finish the course, she explained with some sassiness rising in her voice, came not only from the desire to stop dropping heavy bikes on herself but also to prove herself to the guys already on the motor unit.

“I started to wonder if I would be able to complete the course, but I knew I couldn’t return to this department having failed, so I had to stick it out. And there’s that kind of wanting to prove that a woman could do it. It did get a little bit easier. I started figuring out tricks that worked and how to do it so that I wasn’t dropping the bike on myself every 10 minutes. I very quickly learned that, you know, it hurts if one of those lands on you,” she said with a laugh.

Soon, the crashing gave way to success and Donahue joined the all-male team who encouraged her to take the course, despite her reservations — her four-year-old twins.

“They pushed this hard for probably two years to try and get me to do it. I had a lot of hesitation. I have kids and it’s just so dangerous doing this job on a motorcycle,” Donahue said. “I didn’t want to leave my kids orphans.”

Donahue noted how working with the motor unit offers little protection for officers, opening them up to a variety of potential injuries.

“We work all the fatal motor vehicle collisions in the city and unfortunately a large number of them involve motorcycles, so we are that much more at risk. And then when you factor in the kind of stuff that we’re doing with enforcement and high-risk stops it’s a whole different level of risk. When you’re on a motorcycle you are completely exposed,” she said.

It wasn’t until after a trip in the spring which left the officer of 15 years in an SUV while the others rode along the highway through the warm breeze that Donahue relented.

“We’re a very small team and we’re a very tight-knit team. We do a lot of stuff together, and I wasn’t really a part of the team as their time spent on the motorcycle kind of increased for them and they were getting out more and doing it more. You know, I just realized, if I’m going to be a full part of the team, then that’s going to be something I need to connect to,” she said.

Despite her excellence as a motor officer and her coworkers’ supportive attitude, entering the male-dominated space didn’t come without its share of obstacles and ill-fitting pants.

“I started this career 15 years ago, and there were fewer females in the department and in law enforcement in general,” she said. “I think that there’s always that attitude of having to prove yourself and having to go above and beyond what a typical male officer will have to do. I think we do get judged a little bit more harshly and I think there’s kind of a perception that we have to disprove every time we show up.”

These obstacles, and Donahue’s ability to overcome them, came with more than a personal victory. According to Donahue, she’s become quite popular, with women asking her for photos and talking to her about her boots. Her trailblazing nature proved to empower other women, offering them hope in their success in male-dominated fields.

“It’s neat,” the camera-shy woman said, smiling at the ground.

APD’s Motor Sgt. Scott Pruett was one of many who encouraged Donahue to join the motor unit and now serves as one of her biggest supporters.

He spoke of Donahue’s resilience and precision as a motor officer with admiration, while simultaneously cracking some jokes and sharing a laugh with the officer, lending a glance at the closeness of the team.

“She’s a very level-headed officer — very, very smart. And as a matter of fact, she’s bailed me out of a couple of situations,” Pruett said.

The long-time rider also bailed out Donahue on one occasion, offering off-the-clock motorcycle advice when Donahue realized people wanted to ask her questions about the bike, which she knew nothing about.

“I remember being up on the parkway, one of the first times I’d come back from the class, and I pull over to take a little break and someone started walking up to me and I immediately panicked because I’m not really into motorcycles in the sense that I don’t know a lot about them. The whole time I’m thinking ‘He’s going to ask me something about this bike that I don’t know.’ I immediately came back and started talking to Sgt. Pruett. I’m like, ‘Alright, tell me everything about biking, riding, so I don’t look like an idiot when somebody asks me about it,’” Donahue said.

As for the duo’s most outlandish on-the-job story together? We may never know.

“Pruett is not allowed to answer that,” she said and they shared a laugh.